Judging by Kolkata Knight Riders' reinforcements it doesn’t seem like a huge possibility that they will make the final leap to win the title - their batting remains the key concern. 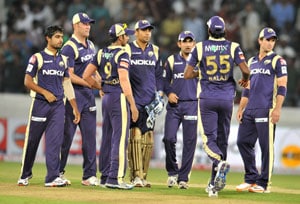 Kolkata Knights Riders turned around their fortunes last season, qualifying for the knockout stage for the first time. It was their maiden semi-final appearance in four years but that was how far they went, crashing out to the Mumbai Indians. Of course, a revamped squad after KKR chose to retain no one from the first three seasons played a huge role. Shah Rukh Khan's side has made a step by step progress since they finished eighth in the 2009 season. So can they finally make the final leap and win the title or at least reach the finals? Well, given that T20 is unpredictable it's always hard to say. But judging by their reinforcements it doesn't seem like a huge possibility, with their batting the key concern.

The biggest problem for KKR is their lack of quality local talent. There is over dependence on some players. Apart from Gautam Gambhir, Yusuf Pathan and Manoj Tiwary they have no one who can be termed a real quality India batsman. Gambhir's form has been up and down but he can be expected to fire on the Indian pitches. Proving his worth as a captain after being overlooked for the vice-captaincy of the Indian team will be an added motivation for Gambhir.

The other two of Kolkata's Indian batting mainstays don't have much practice under their belt. Yusuf Pathan made a comeback to the Indian team in the Asia Cup but he failed to do anything of notice. Also, he didn't exactly set the stage on fire last season. Yusuf, however, is always a threat, a bomb waiting to explode. Tiwary, on the other hand, was part of India's squad for the CB series and the Asia Cup but failed to get a single game. His holiday tours also ensured that he was unable to feature for his state side - Bengal - robbing him of match practice. But he has warmed the bench enough and should be raring to go. He will also be aware that a good showing in the IPL could push him from being a fringe player in the Indian squad to the playing XI.

Adding to the problems for Kolkata is the likely absence of Brad Haddin. The Australia wicketkeeper pulled out of his national team's tour of West Indies due to personal problems. And, if he isn't playing for his country there is little chance he will turn up for the IPL. Given the circumstances, KKR must be thanking their stars that they signed New Zealand wicketkeeper and former Kochi player Brendon McCullum in the February auction. He will not only solve their behind the stumps problems - although KKR also have Manvinder Bisla to don the gloves - but also bolster their batting with his attacking style of play, something that Kolkata really need.

Among the prominent batsmen in the Kolkata squad, only Jacques Kallis and Shakib Al Hasan seem to be in top form. Shakib's performance in the Asia Cup, where he was the man of the series, would have certainly heartened the KKR management. Meanwhile, Kallis is hardly ever out of form for a long period. He is also the fourth highest run-getter in the IPL. Eoin Morgan, on the other hand, has been woefully out of sorts, enough to be dropped from the England side.

KKR's bowling, meanwhile, should be their strength. Brett Lee could form a formidable partnership with countryman James Pattinson upfront. The owners and staff of KKR could have been forgiven for smiling when Pattinson wrecked havoc among the Indian batters in the series against IPL's host nation. Afterall, Kolkata were lucky to have picked an untested Pattinson last season itself and although he didn't get to play any match in IPL 4, there is hardly anything that can stop him from making the team this time. However, his inclusion in the Test squad for the series against the West Indies means he will miss half the T20 tournament. Add to that Marchant de Lange, the South Africa pacer who has made impressive Test and ODI debuts, and Kolkata have lethal pacers in their ranks. Of course, they will be aided by the medium-paced bowling of Kallis, Laxmipathy Balaji, Rajat Bhatia and Laxmi Ratan Shukla.Â

In the spin department, Shakib will have the company of West Indian spinner Sunil Narine who was the surprise pick who commanded a hefty price in the February auction. The 23-year-old has troubled the Aussie batters in the ODI series in the West Indies and should do the same in the IPL. And, given that he is not contracted to the West Indies board he is likely to play the entire T20 tournament despite the Caribbean side having the Australia Test series scheduled during the first part of the IPL season. There will also be the ever-reliable Iqbal Abdullah, the young spinner who has a knack of keeping it tight. He is also capable of providing his team the crucial breakthroughs.