Pune Warriors have suffered a setback to their IPL preparations with a knee injury ruling out the Australian allrounder James Hopes. 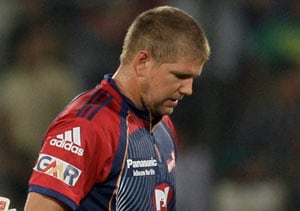 Pune Warriors have suffered a setback to their IPL preparations with a knee injury ruling out the Australian allrounder James Hopes. That means Warriors now have two foreign players' slots left to fill after the IPL governing council allowed the franchise an extra foreigner this season (in addition to the mandatory ten slots) to make up for the absence of the injured Yuvraj Singh.

Hopes was bought by Warriors only last month from Delhi Daredevils. He was the second overseas player the franchise had signed this season, West Indies' Marlon Samuels being the first.

An experienced allrounder, Hopes recently led Queensland to the Sheffield Shield title with a half-century in the first innings and a five-wicket haul in the second.

"It is definitely a setback to lose out on a senior player like Hopes. Having played the IPL in the previous years he would have been a handy player," a Warriors official said.

The official said the franchise was in no hurry to fill the two vacant slots. "It also does not necessarily mean we need to find an allrounder as a replacement for Hopes," he said.

According to the official there had been no fresh development on the Michael Clarke front. Warriors were reportedly talking to Clarke about him coming in as a replacement for Yuvraj, but nothing has been finalised yet.

Comments
Topics mentioned in this article
Indian Premier League 2012 Pune Warriors India Cricket James Hopes
Get the latest updates on T20 World Cup, check out the T20 World Cup Schedule and Live Score . Like us on Facebook or follow us on Twitter for more sports updates. You can also download the NDTV Cricket app for Android or iOS.