India looking ahead for clean sweep in T20 series

With a comprehensive win in the first T20 behind them, Team India will go for the kill as they aim to make a clean sweep over England when the two sides clash in Mumbai in the second and final T20 International. 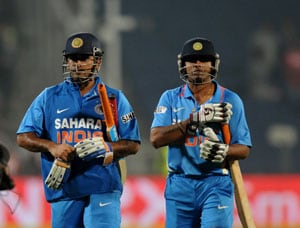 After rebounding superbly from the Test loss to England with a convincing victory in the Twenty20 series opener, India would be keen to complete a clean sweep of the shortest format by winning the second and final game here on Saturday.

Having gained the winning momentum again, the hosts would be eager not to let it go out of grasp especially with the high-profile series against Pakistan to follow immediately after the conclusion of the T20 stint at the Wankhede Stadium.

India will take on Pakistan in a two-match T20 series from December 25 to be followed by a three-game ODI series.

England, who have suffered their first reversal to India in a bilateral T20 game after having lost two others in the World T20 events, would also look forward to squaring the rubber and returning home for Christmas and New Year on a high note.

Though India cantered home last night, the home team has some issues to solve immediately in both batting and bowling to achieve their aim of a 2-0 whitewash

In bowling, the beginning and end overs are still a worry with debutant Parvinder Awana, who had a poor game, and Ashok Dinda bowling too short yesterday to be punished by the hard-hitting Alex Hales who blitzed his way to 56 with seven fours and two sixes.

Though Dinda came back later to bowl well and take two wickets, Awana's nervousness cost him 29 runs in two overs at either end of the innings and he is expected to give way to Bhuvneshwar Kumar or Abhimanyu Mithun on Saturday.

Even R Ashwin, who started off well and bowled a maiden over to the left-handed Michael Lumb before taking his wicket too, was carted around later to concede 33 runs. Ravindra Jadeja gave away 22 runs in three and Piyush 24 in the same number of overs.

But for Yuvraj Singh's brilliant stint in the middle overs, when he got 3 for 19 to halt Hales and Luke Wright from running away with the game, India could have conceded 15-20 more runs, a fact not lost on rival skipper Eoin Morgan.

"We got off to a fantastic start - Alex and Luke really came together as a pair - but from there we didn't really kick on," said Morgan.

Hales and Wright added 68 runs in quick time, thrashing the Indian bowlers, before Yuvraj turned the match around with a 3-19 spell that included both these batsmen's wickets as well as Morgan's.

In batting too, India started off brilliantly before openers Gautam Gambhir and Ajinkya Rahane threw away their wickets in close succession by trying to hit big.

It was Yuvraj's experience and his ability to clear the rope at will that helped the home country steady the innings and then surge to a comfortable victory with 13 balls to spare.

The left-handed dasher smashed 38 in 21 balls to help India regain the early advantage. Then useful contributions from Virat Kohli (21), Suresh Raina, who was also needlessly run out for 26 and captain Mahendra Singh Dhoni (24 not out), saw the home team cross the finish line.

England too have their problems, the prominent among them is to find an effective spinner in the middle overs as Danny Briggs' left-arm spin was taken to the cleaners along with James Tredwell's off spin.

Stuart Meaker provided the extra pace to trouble the Indian batsmen, including Yuvraj, and Tim Bresnan was also impressive, while Wright was effective with his slow medium bowling.

In batting, Hales, who had flopped in his previous three games against India, came good yesterday with his forthright batting. England would hope the others - that includes their hard-hitting captain Morgan - deliver in the last game of the first half of their visit.