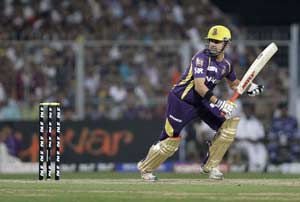 "After starting off badly, we did play better to set a target of 98. However, Delhi played better and were the deserving winners," Gambhir said at the post match conference.

He refused to blame the loss either on the toss or the truncated game.

"These things are not in your hand. Of course, we too would have chosen to chase had we won the toss."

Gambhir also had words of praise for local boys Laxmi Ratan Shukla and Debabrata Das who played well enough to take the Knight Riders to a respectable total.

"In spite of being 34 for 4 we posted a challenging total. Shukla and Das both played well enough. They have been batting well in the nets and they are surely the players to watch out for," said Gambhir.

He also hoped South African pacer Merchant de Lange, who gave 36 runs in his 3 overs, will come good in the later matches.

Meanwhile, Irfan Pathan, who top scored in the match with a quick fire 42 to become the man of the match, said the wicket in the second half became better for stroke making.

Comments
Topics mentioned in this article
Cricket Indian Premier League 2012 Delhi Daredevils Ajaysinhji D. Jadeja Shoaib Akhtar Kolkata Knight Riders Gautam Gambhir Debabrata Das Laxmi Shukla
Get the latest updates on IPL Auction 2023 and check out  IPL 2023 and Live Cricket Score. Like us on Facebook or follow us on Twitter for more sports updates. You can also download the NDTV Cricket app for Android or iOS.