Former England batsman Paul Collingwood starred for Durham with an unbeaten 88 in the first innings. 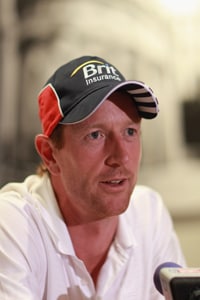 Durham won their third County Championship title in six years after completing an eight-wicket victory over Nottinghamshire with more than a day to spare on Thursday.

They took just 16 overs Thursday to reach their target, and although they lost Keaton Jennings and Scott Borthwick along the way, Mark Stoneman's 35 not out saw Durham to victory, the opener sealing the title in style with a boundary off Paul Franks.

Durham, captained by former England batsman Paul Collingwood - one of several locally-produced players in their side - bucked the trend among county teams by opting to do without an overseas star this season.

They also were without the input of long-serving coach Geoff Cook for much of the season after he suffered a heart attack.

Durham's latest Championship title to set alongside their 2008 and 2009 triumphs continued a run of success all the more impressive given it is only 21 years since they played their first match as England's 18th first-class county.

Victory in this match was all but assured after England seamer Graham Onions and fellow paceman Chris Rushworth shared six wickets between them as Nottinghamshire were shot out for just 78.

Having ended the first day on 207 for eight, with Collingwood 53 not out, Durham just did enough to get past 250 to claim a second batting bonus that meant a win would give them the title regardless of the result of nearest rivals Yorkshire's match against Sussex.

Collingwood, leading from the front, finished on 88 not out in Durham's total of 256.

Australia's David Hussey made a fifty in a much improved Nottinghamshire second innings total of 246 but that still left Durham with a meagre victory target.

Had Durham asked for the extra half hour at Wednesday's scheduled close, something the umpires in any case would have had to authorise, they might just have had enough time to wrap up victory inside two days.

But given the huge amount of time left in the match, Durham decided there was no need to rush and their patience was rewarded on Thursday.

Comments
Topics mentioned in this article
Cricket England Cricket Team Australia Cricket Team David Hussey Rahul Dravid Mitchell Johnson David Warner Indian Premier League 2012
Get the latest updates on IPL Auction 2023 and check out  IPL 2023 and Live Cricket Score. Like us on Facebook or follow us on Twitter for more sports updates. You can also download the NDTV Cricket app for Android or iOS.