Dinesh Karthik, the Tamil Nadu wicketkeeper, will move from Kings XI Punjab to the Mumbai Indians in the first notable transfer ahead of the IPL's fifth season. 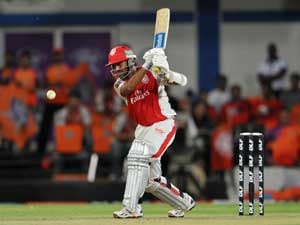 Dinesh Karthik, the Tamil Nadu wicketkeeper, will move from Kings XI Punjab to the Mumbai Indians in the first notable transfer ahead of the IPL's fifth season. Karthik was bagged by the Mumbai Indians for an undisclosed sum. A BCCI insider said it was easily the highest sum paid to buy a player from another team in the history of the IPL. In exchange for Karthik, all-rounder R Sathish will go to Kings XI.

"It was a substantial sum and easily the highest in strictly trading terms," the board official said. "Mumbai wanted a keeper. Punjab did not mind as they were getting a good amount of money."

Kings XI had spent $900,000 (Rs 4.77 crores) on Karthik during the Jaunary 2011 auction, making him the second-most expensive player in their squad, behind David Hussey and joint with captain Adam Gilchrist. Though the IPL and both franchises have been muted about the trade, it is understood that Mumbai have paid somewhere between $2-2.5 million (Rs 10.59-13.2 crores) for Karthik. Unlike during the auction, when the franchises are restricted by a specific purse, there are no caps on spending during trading. According to IPL rules, 20% of the profit made in a trade - in this case believed to be between $1.1-1.6 million - goes to the player with the rest going to the franchise selling him.

Despite having a power-packed squad, Mumbai Indians have struggled to find a full-time wicketkeeper. Yogesh Takawale, Luke Ronchi and Aditya Tare were tried over the first three seasons. They bought South African Davy Jacobs during the 2011 auction, and he turned heads by standing up to the quicks. However, he picked up a hip injury during the Champions League T20 in September last year, forcing Mumbai Indians to throw the gloves to Ambati Rayudu, whose frailties as a keeper were exposed during the tournament.

When the trading window opened on December 15, 2011, Mumbai Indians immediately declared their interest in Karthik. Kings XI have Gilchrist as their first-choice wicketkeeper and Haryana's Nitin Saini in reserve, which would have made it easier for them to take the large amount offered for Karthik.

Karthik spent the first three IPL seasons at the Delhi Daredevils but they did not retain him for the next season. Kings XI grabbed him at the auction, doubling the $525,000 Delhi had bought him for in 2008. Karthik was the first-choice wicketkeeper for the Daredevils but had to play as a batsman for Kings XI. In thirteen matches for Kings XI, he scored 282 runs at 25.63. In his 46 matches for the Daredevils, in the IPL and CLT20, he got 803 runs at 25.90 and affected 37 dismissals.

Sathish joined the Mumbai Indians for the third season of the IPL; he was granted amnesty by the BCCI after he quit the rebel Indian Cricket League. He played 28 matches for the Mumbai Indians in the IPL and CLT20, scored 223 runs at 15.92 and took two wickets. He also impressed with his athletic fielding.

Comments
Topics mentioned in this article
Yuvraj Singh Kings XI Punjab Indian Premier League 2012 Rajagopal Sathish Dinesh Karthik Cricket Mumbai Indians
Get the latest updates on IPL Auction 2023 and check out  IPL 2023 and Live Cricket Score. Like us on Facebook or follow us on Twitter for more sports updates. You can also download the NDTV Cricket app for Android or iOS.