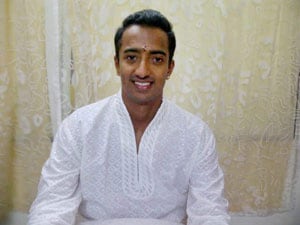 Tainted cricketer Ankeet Chavan and young Harmeet Singh were on Friday severely scolded by the senior members of BCCI's disciplinary committee that handed life ban to the 27-year-old spinner while reprimanding the India U-19 World Cup star for IPL spot-fixing scandal.

"What exactly were you thinking when you decided to indulge in such wrongdoings?" one of the senior committee members apparently asked Chavan.

"Did you ever think about the consequences that will be faced by your parents and family?" was another question asked to Chavan.

Harmeet, who was let-off with a reprimand was asked as to how he decided to meet strangers even after attending classes on how to avoid questionable people.

The committee took a soft stand on the Mumbai-based Sardar considering his age and having understood that IPL was his first-brush with big-time cricket after the highs of the U-19 World Cup triumph.

Around 10:45 am, a young man wearing a crushed, untucked white shirt and regular denims slowly trudged towards the ITC Maurya door with another middle-aged man.

It was left-arm spinner Chavan, who has been arrested on allegations of spot-fixing and later released on bail.

Chavan had a plastic carry bag in his hand. He did look pale and disturbed. And before the camerapersons of electronic and print media could warm up for that perfect shot, Chavan found himself in the confines of the hotel.

Exactly half an hour later, it was S Sreesanth, clad in light blue full sleeve shirt and black jeans. He walked in along with a friend named Manoj. It could be seen from his face that he was tensed but tried to put up a brave face as the mediapersons had suitably warmed themselves up for the occasion by then.

Comments
Topics mentioned in this article
Cricket BCCI NR Shah Ankeet Chavan Sourav Ganguly Indian Premier League 2012
Get the latest updates on IPL Auction 2023 and check out  IPL 2023 and Live Cricket Score. Like us on Facebook or follow us on Twitter for more sports updates. You can also download the NDTV Cricket app for Android or iOS.