Mumbai Indians' Ambati Rayudu and Royal Challengers Bangalore's Harshal Patel have been fined for breaching the Code of Conduct after an ugly spat occurred between the two during an Indian Premier League match here. 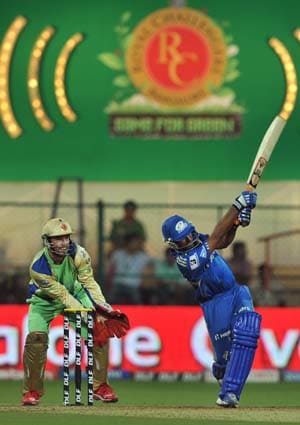 Mumbai Indians' Ambati Rayudu and Royal Challengers Bangalore's Harshal Patel have been fined for breaching the Code of Conduct after an ugly spat occurred between the two during an Indian Premier League match here.

While Rayudu was fined 100 per cent of his match fee, Patel has been reprimanded and fined 25 per cent of his earning for their showdown after the end of the game at the M Chinnaswamy Stadium on Monday.

Rayudu has been fined for using obscene and abusive language towards Patel - a Level 2 offence under Article 2.2.8 of IPL Code of Conduct.

Patel, meanwhile, has been reprimanded and fined for bringing the game into disrepute by his aggressive reaction to Rayudu's words - Level 1 offence under Article 2.1.8.

The incident took place when Rayudu, while celebrating MI's five-wicket win over RCB, allegedly passed some comments on Patel that enraged the tall medium pacer who tried to charge menacingly at the Mumbai batsman before his captain Virat Kohli physically stopped him.

According to a statement from IPL organisers, both the players admitted to the offences and accepted the imposition of the sanctions.

Meanwhile, Mumbai Indians skipper Harbhajan Singh has also been fined for maintaining a slow over rate during the match against RCB.

At the end of the match, Mumbai Indians were assessed to be one over behind the required rate after allowances were taken into consideration.

Since it was Harbhajan's first offence of the season under the IPL's Code of Conduct relating to minimum over rate offences, the Mumbai captain was fined USD 20,000.

Comments
Topics mentioned in this article
Cricket Unmukt Chand Harshal Patel Indian Premier League 2012 Sachin Ramesh Tendulkar Ambati Rayudu Mumbai Indians Subramaniam Badrinath BCCI
Get the latest updates on India vs Australia Series, check out the India vs Australia Schedule for 2020-21 and Ind vs Aus live score . Like us on Facebook or follow us on Twitter for more sports updates. You can also download the NDTV Cricket app for Android or iOS.