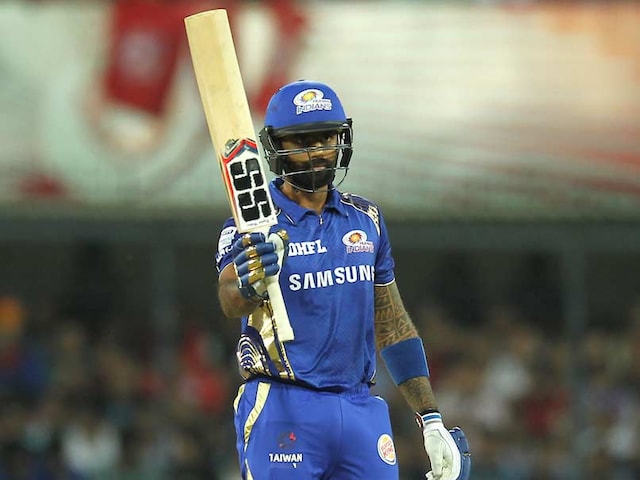 Mumbai Indians (MI) kept their playoff hopes alive after a 6-wicket win over Kings XI Punjab in their Indian Premier League (IPL) clash on Friday at the Holkar Cricket Stadium, Indore. Chasing 175 runs, Mumbai got off to a cautious start. Both openers Suryakumar Yadav and Evin Lewis were taking a reserved approach early but as the game progressed they began hitting the boundaries. Lewis departed for 10 in the 6th over. Suryakumar (57) brought up his brilliant fifty to ensure Mumbai remained in the hunt and he was ably supported by Ishan Kishan (25). Suryakumar hit six fours and three sixes in his 42-ball knock. Punjab got back into the game with quick wickets of Suryakumar and Ishan. Hardik Pandya also chipped in with 23 runs before departing in the 16th over. Mumbai skipper Rohit Sharma (24*) and Krunal Pandya (31) ensured Mumbai got over the finishing line and won the match. Punjab skipper R Ashwin was the only economical bowler but he got no wickets. Mujeeb Ur Rahman got two wickets but was expensive. (SCORECARD)

Earlier, a late flourish by Marcus Stoinis helped Punjab (KXIP) reach 174/6 against Mumbai in their IPL. Put into bat first by Mumbai skipper Rohit Sharma, KL Rahul and Chris Gayle got off to a decent start as they both stitched a 54-run partnership for the first wicket. Rahul departed for 24 and Gayle continued his impressive form with the bat after hitting his 24th IPL fifty. Gayle started slowly but made up later for the lack of runs with his power hitting. His innings was laced with six fours and two sixes. Yuvraj Singh's slump in form continued as he failed to score runs as he got dismissed for 14 runs after a horrendous run-out in the 13th over. Karun Nair hit a quickfire 23 runs while Axar Patel (13) chipped with a few runs. Mumbai skipper Rohit used seven bowlers of which Jasprit Bumrah (1/19) stood out while Mitchell McClenaghan (1/31) also bowled well. A late cameo of 29 runs off 15 balls by Stoinis helped Punjab reach a respectable total.