IPL 2018: When Yuvraj Singh And Ashish Nehra Danced Their Hearts Out Ahead Of Match. Watch

Ahead of Kings XI Punjab's clash against Royal Challengers Bangalore in Indore, Yuvraj and Nehra decided to have a bonding session. 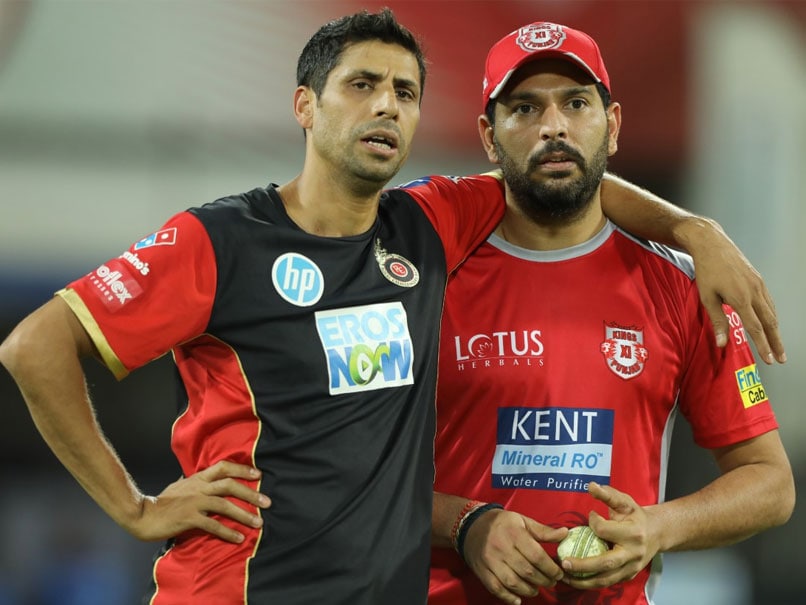 Both Yuvraj and Nehra are known as one of the entertaining players on and off the field.© BCCI

Though Yuvraj Singh and Ashish Nehra they are involved with two different teams in the Indian Premier League (IPL) 2018, their bonding is quite evident whenever the duo meets on or off the field. Yuvraj Singh is playing for Kings XI Punjab this season, while Nehra, who retired from all forms of cricket last year, is the bowling coach of Virat Kohli-led Royal Challengers Bangalore. Ahead of Kings XI Punjab's clash against Royal Challengers Bangalore in Indore, Yuvraj and Nehra decided to have a bonding session.

In a video post by the IPL on its Twitter handle, Yuvraj and Nehra can be seen dancing and greeting each other.

Both Yuvraj and Nehra are known as one of the entertaining players on and off the field.

Nehra made his international debut in 1999 against Sri Lanka in Colombo, while Yuvraj donned India jersey for the first time in 2000 against Kenya.

The duo was the part of the victorious 2011 World Cup Indian team.

Nehra, who was retired last year after playing his final match for India against New Zealand at Feroz Shah Kotla in Delhi, received an emotional message from Yuvraj after hanging up his cricketing boots.

Yuvraj had written a long tribute for Nehra on Facebook.

"Ashish Nehra - The first thing that I can say about my buddy Ashu is that he is an extremely honest man...woh dil ka bahut saaf aadmi hai. Perhaps only a holy book is more honest than him. I know a few jaws are dropping and a many more eyes are popping out after reading this," he wrote in his post.

"I first met him in my under-19 days and he had got picked for the Indian team. He was sharing room with Harbhajan Singh. I had gone to see Bhajji and noticed this tall, lean guy who just couldn't stay still. He was like a cat on an extremely hot tin roof. He'd be sitting still one moment and all of a sudden break into a stretch or twitch his face or just roll his eyes. I found it extremely funny and thought may be someone has put ants in his pants," he wrote.

He also revealed that former captain Sourav Ganguly called Nehra 'Popat' as he used to talk a lot.

"Sourav Ganguly gave Ashu the nickname Popat as he talked a lot. I mean he can talk even under water! Plus he is hilarious. For me he doesn't need to speak, there is something about his body language that is so funny", he added.

Comments
Topics mentioned in this article
Royal Challengers Bangalore Kings XI Punjab Yuvraj Singh Ashish Nehra Indian Premier League 2018 Cricket
Get the latest updates on IPL 2021, check out the IPL 2021 Schedule and Indian Premier League Live Score . Like us on Facebook or follow us on Twitter for more sports updates. You can also download the NDTV Cricket app for Android or iOS.