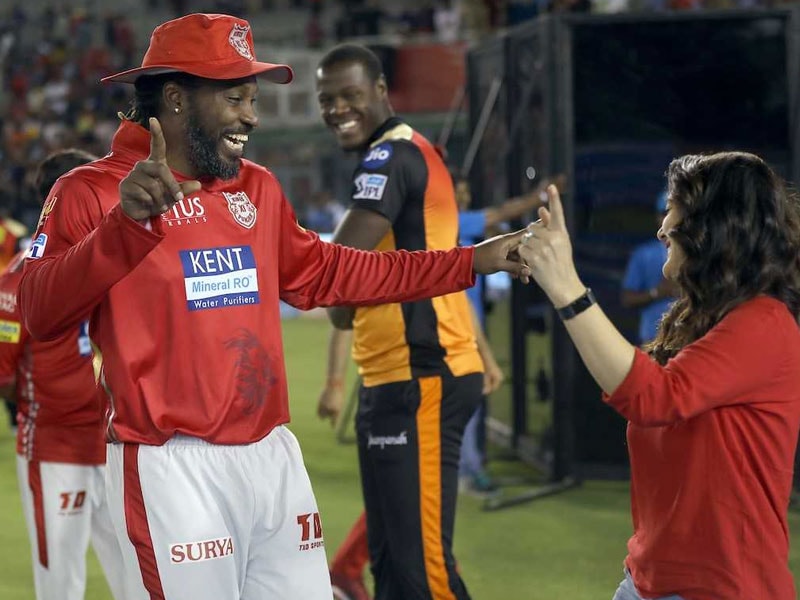 Chris Gayle had a massive point to prove to many Indian Premier League (IPL) franchise owners after twice going unsold in the IPL 2018 auction, earlier this year, before being picked up by Kings XI Punjab for his base price. On Thursday, the big-hitting West Indian repaid the faith shown by Punjab owner Preity Zinta and the team management by blasting the first century of IPL 2018, sixth of his IPL career and the highest by any batsman in the 11 seasons of the tournament. As the dust settled at the Punjab Cricket Association IS Bindra Stadium in Mohali after the Gaylestorm, team mentor Virender Sehwag decided to poke some fun at all those who thought Gayle was finished with a hilarious claim.

After Punjab's 15-run over SunRisers Hyderabad, Sehwag hilariously claimed on Twitter that he had saved IPL by picking up Gayle at the IPL auction.

I saved the IPL by picking - @henrygayle.

Soon after, came an emphatic "Yes!" from the 'Universe Boss' as a reply to Sehwag's tweet.

However, it was Gayle who had first claimed that Sehwag had saved the IPL by buying him at the IPL auction.

"I think Virender Sehwag saved the IPL by picking me,” said Gayle. “Everyone says I have a lot to prove. I am just here to put some respect on my name," Gayle said on Thursday after smashing an unbeaten hundred against SRH.

Gayle was left out of Punjab's first two matches of IPL 2018 but made an instant impact after being drafted into the playing XI in the encounter against MS Dhoni-led Chennai Super Kings in Mohali.

The West Indian left-hander smashed 63 off just 33 balls to power Kings XI Punjab to 197 for seven in their allotted 20 overs. Dhoni produced a superlative innings of 79 off 44 balls but it wasn't enough for the 'yellow brigade' as Punjab clinched a thrilling four-run win.

On Thursday, it was touted to be a much harder challenge for Gayle -- against an in-form SunRisers bowling that boasted the likes of Bhuvneshwar Kumar, Chris Jordan, Rashid Khan and Shakib Al Hasan.

Bhuvneshwar and Jordan were impressive, returning with figures of 1/25 and 0/30 respectively. However, SunRisers' main weapon Afghanistan's leg-spinning enigma, Rashid Khan, was not just negated but completely destroyed by Gayle.

In his four overs, Rashid gave away 55 runs and took just one wicket at an economy rate of 13.75. In the last over of Punjab's innings, Rashid was plundered for 20 runs, registering his poorest figures in a T20.

This was Punjab's third win of the 2018 season but for SunRisers, it was their first defeat after three successive wins.

Comments
Topics mentioned in this article
Kings XI Punjab Sunrisers Hyderabad Chris Gayle Virender Sehwag Indian Premier League 2018 Cricket
Get the latest updates on IPL Auction 2023 and check out  IPL 2023 and Live Cricket Score. Like us on Facebook or follow us on Twitter for more sports updates. You can also download the NDTV Cricket app for Android or iOS.