RCB will commence their campaign on April 8 against Kolkata Knight Riders. 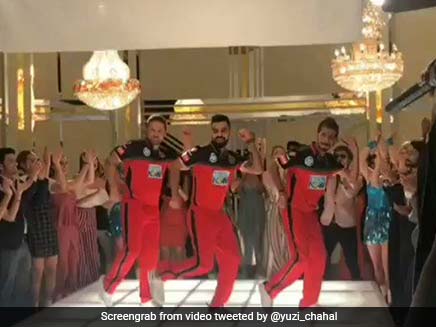 The 11th edition of the cash-rich Indian Premier League (IPL) begins this Saturday with grand opening ceremony scheduled to be held at the Wankhede stadium, Mumbai. As we near the league opener, team members are bonding off the field and leg spinner Yuzvendra Chahal's video suggests so. Taking to Twitter, Chahal shared a short video showing Royal Challengers Bangalore (RCB) captain Virat Kohli, new recruit Brendon McCullum and himself showcasing some dance moves. In the 12-second video, the three players are seen shaking a leg with Kohli stealing the limelight with his smooth dance moves.

RCB, despite being one of the most commanding teams of the league, never really managed to lift the coveted trophy. After a deplorable first season, the team bounced back in style in Season 2 and produced a similar performance in the third season as well. However, Mumbai Indians (MI) crashed their party as they proved to be an obstacle in 2010. RCB continued their dominant performance in the 2011 season and reached the final of the tournament.

The RCB batting unit for the 11th season will be strengthened further with the presence of former New Zealand batsman McCullum, South Africa wicketkeeper batsmen Quinton De Kock and Indian wicketkeeper Parthiv Patel. The spin department of RCB will be led by Chahal, Washington Sundar, M Ashwin and Pawan Negi.

RCB will commence their campaign on April 8 against Kolkata Knight Riders.

Sponsored by Vuukle
Comments
Topics mentioned in this article
Royal Challengers Bangalore Yuzvendra Chahal Virat Kohli Brendon McCullum Indian Premier League 2018 Cricket
Get the latest updates on Fifa Worldcup 2022 and check out  Fifa World Cup Schedule, Stats and Live Cricket Score. Like us on Facebook or follow us on Twitter for more sports updates. You can also download the NDTV Cricket app for Android or iOS.