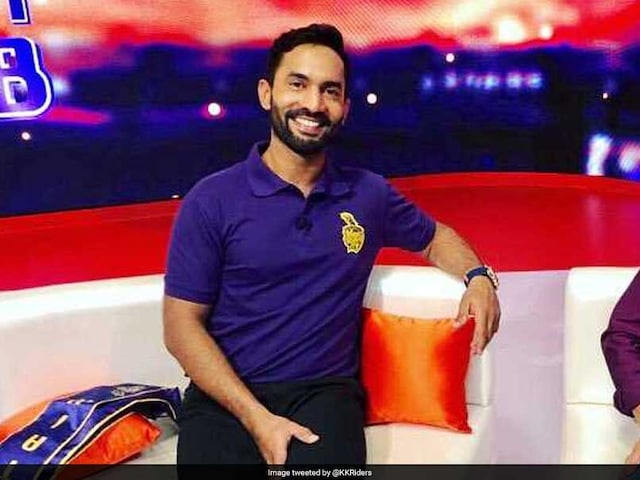 Dinesh Karthik will lead Kolkata Knight Riders in the 11th edition of the IPL.© Twitter

Indian Premier League (IPL) franchise Kolkata Knight Riders (KKR) on Sunday named Dinesh Karthik as their captain for the 11th edition of the cash-rich league. Karthik and Robin Uthappa were the favourites to lead KKR for the upcoming season after the Kolkata franchise let go of their most successful captain Gautam Gambhir. Welcoming the new captain, team co-owner and Bollywood star Shah Rukh Khan took to Twitter on Monday and welcomed Karthik to the family with a special message for wicketkeeper-batsman.

"As we stand poised for a new season of KKR we welcome @DineshKarthik as our Captain. Like our Captains over the yrs we know u will also lead us by boosting the self esteem & dignity of all of us," Shah Rukh Khan tweeted.

As we stand poised for a new season of KKR we welcome @DineshKarthik as our Captain. Like our Captains over the yrs we know u will also lead us by boosting the self esteem & dignity of all of us.

While Karthik will lead the KKR side, Uthappa will be his deputy, team CEO Venky Mysore said. Karthik was bought by KKR for Rs 7.8 crore in the mega IPL auction earlier this year.

"KKR has done well consistently in the last 10 years. The team has a great legacy. I am really happy and honoured to lead this side," Karthik said after being unveiled as captain.

"We have a good blend of youth and experience. We are looking forward to working under coach Jacques Kallis. All the foreign players are really good too. I will try to take the team forward from where Gautam Gambhir left," he added.

"The principle we operated on was that we were looking for a long-term change. We were looking at someone who could continue to lead the side like Gautam," said Venky Mysore.

The Indian wicketkeeper-batsman has past experience of leading a side. The 32-year-old has captained Tamil Nadu in domestic cricket and led them to the Vijay Hazare Trophy title in 2009-10.

Karthik also captained the India Red team that clinched the Duleep Trophy in 2017.

Comments
Topics mentioned in this article
Kolkata Knight Riders Dinesh Karthik Cricket Indian Premier League 2018
Get the latest Cricket news, check out the India cricket schedule, Cricket live score . Like us on Facebook or follow us on Twitter for more sports updates. You can also download the NDTV Cricket app for Android or iOS.