Dhoni also highlighted the importance of the dressing room atmosphere for his team's success over the years. 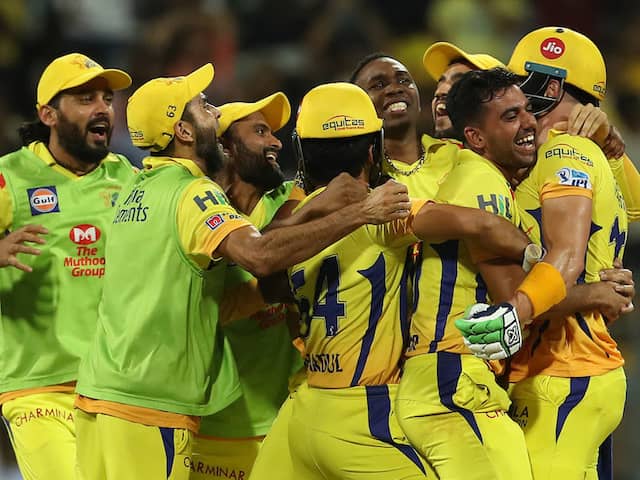 Chennai Super Kings (CSK) stormed into the Indian Premier League (IPL) final for the seventh time on Tuesday after a thrilling last-over win over SunRisers Hyderabad (SRH). CSK skipper Mahendra Singh Dhoni credited his team's lower order who played a key role towards the end of the match. "Credit to the CSK lower order. They bat a long way down and they kept us under pressure. It is rough being on the other side of close ones, but we have been on the right side a number of times this year. It is important that we learn from this experience," he said. Dhoni also highlighted the importance of the dressing room atmosphere for his team's success over the years. In the first qualifier of 2018 season, Chennai pulled off a last-over thriller against the Kane Williamson-led Hyderabad, thanks to an incredible unbeaten 67-run knock by opener Faf du Plessis. "We've been a very good team and it reflects when it comes to the IPL. It reflects the dressing room atmosphere we've been able to create. It's not possible without that," Dhoni said after the match.

"Credit goes to management, support staff and players. Even if one of them is lacking you can't have a good dressing room atmosphere. If the atmosphere is not great, it becomes difficult to perform," he added.

In the match which went down the wire, the yellow brigade were once reeling at 92/7 losing all of their key batsmen however, it was South African du Plessis who held his nerve to single-handedly carve out a win.

On such close games, the Chennai skipper said: "Good to win games like this. But what's important is to learn out of this game. It's about constantly improving."

"This is the best combination that we have got. And right from the first game we've used different bowlers in different ways to find out who is the best bowler at the end," Dhoni said, about constantly reshuffling his team combination.

Meanwhile, admitting that the target was too small, Hyderabad skipper Kane Williamson heaped praise on the Chennai lower order.

"It was a good game of cricket, but if we are honest with ourselves, we were a few runs short with the bat. It was definitely not a 140 wicket. It was a decent wicket and we would have liked 20 more," he rued.

Comments
Topics mentioned in this article
Chennai Super Kings Sunrisers Hyderabad Indian Premier League 2018 MS Dhoni Sunrisers Hyderabad vs Chennai Super Kings, Qualifier 1 Cricket
Get the latest Cricket news, check out the India cricket schedule, Cricket live score . Like us on Facebook or follow us on Twitter for more sports updates. You can also download the NDTV Cricket app for Android or iOS.