Rohit Sharma has not been at his best in IPL 2018 but he achieved two rare feats in Mumbai Indians' crucial win over Kings XI Punjab on Friday night. 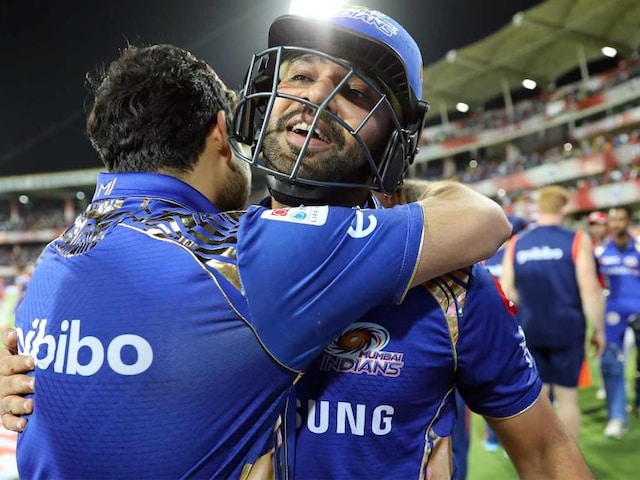 Rohit Sharma might not be hitting the heights that is expected of him in the ongoing IPL 2018 but that has not stopped the Mumbai Indians from making history. Rohit became the first Indian to hit 300 sixes in Twenty20 cricket when he smacked Mujeeb ur Rahman for a maximum in Mumbai Indians' crucial win over Kings XI Punjab at the Holkar Cricket Stadium in Indore on Friday night. Not just that, Rohit was not out on 24, which was the 17th time that the India batsman has remained unbeaten in chases. And on all 17 occasions he has ended up on the winning side -- a new IPL record. The 32-year-old went past the record of Gautam Gambhir's 16 such instances.

Rohit is the seventh batsman overall to hit 300 sixes in T20s. Chris Gayle leads the list with a whopping 844 sixes in international and domestic T20 matches.

The six-wicket win over Punjab was crucial to the defending champions' hopes of reaching the playoffs. Mumbai climbed to fifth in the IPL Points Table with six points from nine games.

Rohit has given up his usual opening spot to Suryakumar Yadav, who has grabbed the opportunity with both hands. Suryakumar was again at the forefront of Mumbai's chase and his 42-ball 57 was instrumental in his team overhauling a tricky target.

Rohit, who has been so successful up the order for Mumbai, has dropped down to the middle-order in a bid to become the finisher for Mumbai in chases and on Friday night against Punjab, he did exactly that.

Chris Gayle's half-century and some lusty blows by Marcus Stoinis helped Punjab post a competitive 174 for six in 20 overs after being put into bat.

Mumbai started the chase slowly but some clean hitting by Suryakumar got them back on track. Ishan Kishan (25) and Hardik Pandya (23) played handy cameos to help Mumbai keep up with the asking rate.

However, when Hardik fell in the 16th over, Mumbai still needed 55 runs off 27 balls. But Rohit changed the game on it's head by smashing Mujeeb ur Rahman for two sixes in the 17th over.

Krunal and Rohit then combined to plunder Stoinis for 20 runs in the 18th over to leave Mumbai needing just 16 off the final two overs.

Krunal got the job done as Andrew Tye went for 17 in the 19th as Mumbai comfortably got over the line to stay alive in the tournament.

Comments
Topics mentioned in this article
Mumbai Indians Kings XI Punjab Rohit Sharma Suryakumar Yadav Gautam Gambhir Indian Premier League 2018 Cricket
Get the latest updates on IPL 2020, check out the IPL Schedule for 2020 and Indian Premier League (IPL) Cricket live score . Like us on Facebook or follow us on Twitter for more sports updates. You can also download the NDTV Cricket app for Android or iOS.