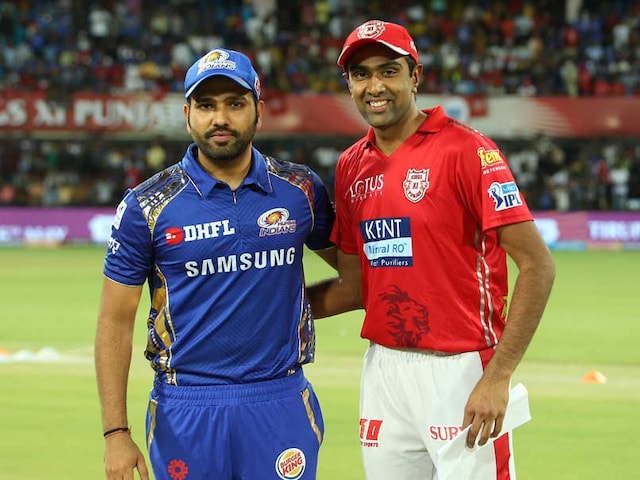 Mumbai Indians (MI) kept their playoff hopes alive after a 6-wicket win over Kings XI Punjab in their Indian Premier League (IPL) clash on Friday at the Holkar Cricket Stadium, Indore. Chasing 175 runs, Mumbai got off to a cautious start. Both openers Suryakumar Yadav and Evin Lewis were taking a reserved approach early but as the game progressed they began hitting the boundaries. Lewis departed for 10 in the 6th over. Suryakumar (57) brought up his brilliant fifty to ensure Mumbai remained in the hunt and he was ably supported by Ishan Kishan (25). Suryakumar hit six fours and three sixes in his 42-ball knock. Punjab got back into the game with quick wickets of Suryakumar and Ishan. Hardik Pandya also chipped in with 23 runs before departing in the 16th over. Mumbai skipper Rohit Sharma (24*) and Krunal Pandya (31) ensured Mumbai got over the finishing line and won the match. Punjab skipper R Ashwin was the only economical bowler but he got no wickets. Mujeeb Ur Rahman got two wickets but was expensive. (SCORECARD)

Earlier, a late flourish by Marcus Stoinis helped Punjab (KXIP) reach 174/6 against Mumbai in their IPL. Put into bat first by Mumbai skipper Rohit Sharma, KL Rahul and Chris Gayle got off to a decent start as they both stitched a 54-run partnership for the first wicket. Rahul departed for 24 and Gayle continued his impressive form with the bat after hitting his 24th IPL fifty. Gayle started slowly but made up later for the lack of runs with his power hitting. His innings was laced with six fours and two sixes. Yuvraj Singh's slump in form continued as he failed to score runs as he got dismissed for 14 runs after a horrendous run-out in the 13th over. Karun Nair hit a quickfire 23 runs while Axar Patel (13) chipped with a few runs. Mumbai skipper Rohit used seven bowlers of which Jasprit Bumrah (1/19) stood out while Mitchell McClenaghan (1/31) also bowled well. A late cameo of 29 runs off 15 balls by Stoinis helped Punjab reach a respectable total.

23:35 IST: Thank you for staying with us for the live match updates.

23:28 IST: FOUR! Krunal gets a boundary and Mumbai inch closer to a win. This is a must-win game for them to stay alive in the tournament.

23:25 IST: FOUR! Low full toss and Krunal gets a four. It is getting easier for them. Mumbai supporters are believing now

23:23 IST: FOUR! Now its Krunal's turn to hit the boundaries. A good shot over the covers.

23:22 IST: FOUR! What a blistering cover drive by Rohit. Superb shot by him. He is turning this on.

23:15 IST: FOUR! Krunal Pandya opens his account with a four.

23:12 IST: OUT! Andrew Tye castles Hardik Pandya. Mumbai are in deep trouble. They lose their 4th wicket. Wonderful bit of angle for Tye to remove Hardik. MI 120/4 in 15.3 overs

23:07 IST: SIX! Super special from Hardik. Superb shot. Over the bowler's head and he smashes Mujeeb over to the stands. MI need 58 runs off 34 balls

23:00 IST: SIX! Ishan Kishan hits a maximum. 506th six of the tournament. 100 comes up. Picks Mujeeb and hammers it over long on. A good over for the visitors.

22:52 IST: OUT! Suryakumar departs for 57 runs. Stoinis gets the crucial wicket of Yadav. A straight one and poorly timed. A good catch by KL Rahul. Mumbai lose their second wicket MI 80/2 in 11.4 overs

22:48 IST: SIX! Ishan Kishan gets a timely six. Connects the ball really well and hits it cleanly over the leg side boundary. MI 77/1 in 11 overs

22:44 IST: FIFTY! Suryakumar gets his fifty with a sublime four. He has batted so well. He has to be that dominant force. This is his 3rd IPL fifty this season. MI 67/1 in 10 overs

22:29 IST: FOUR! Picks Axar Patel well and takes him to the boundary. A good shot by Suryakumar.

22:22 IST: OUT! Evin Lewis falls for 10. Caught behind the stumps by Rahul. Mujeeb Ur Rahman bowls a superb delivery to deceive the batsman. MI 38/1 in 5.4 overs

22:21 IST: Mujeeb Ur Rahman is the new bowler. Bowls the last over of the powerplay.

22:16 IST: FOUR! Finds the gap and Suryakumar gets another boundary.

22:15 IST: FOUR! Suryakumar is on fire. A second boundary off this over. Great wrist movement and guides the ball towards the boundary. MI 32/0 in 4 overs

22:11 IST: SIX! Sweet sound off the bat. Suryakumar hammers it over the leg side. Right into his zone and hits a maximum. MI 27/0

22:05 IST: There was some noise as SK Yadav was beaten by Rajpoot's back of the length delivery that was going down leg. The umpire said no but KL Rahul convinced Ashwin to use KXIP's only review. DRS shows not out.

Kings XI have only lost to Mumbai Indians at this ground.

21:26 IST: Credit to the Mumbai bowlers and their captain Rohit Sharma for making bowling changes at regular intervals. They have taken control of the match with quick wickets.

21:20 IST: SIX! Karun Nair gets into the act now. Pulls it over the leg side for a six. A good-looking shot. That is one stylish shot into the first tier.

21:16 IST: SIX! Bang. Out of the ground by Patel. Absolutely smashed it. Superb shot. Smacks it out of the park. Run rate has increased for Punjab.

21:12 IST: FOUR! A leading edge off Nair's bat and Cutting bemoans his lack of luck. Free runs for the batting side.

21:10 IST: Axar Patel and Nair have to build a partnership. They don't have much batting left.

21:06 IST: Mumbai bowlers have pegged the Punjab batsmen now. Two new batsmen out there in the middle for Punjab. Gayle and Yuvraj's wicket has brought Mumbai back into this game. KXIP 99/3 in 13 overs

21:05 IST: OUT! Crazy run taken. Yuvraj walking back. He knows that his out.Yuvi is out by miles. Poor running between the wickets. Crazy mix up. Punjab lose their third wicket. KXIP 96/3 in 12.3 overs

21:03 IST: SIX! Yuvraj hits the ball towards the 2nd tier. Gets it in his arc and pulls it over the mid off region for a maximum. Not an ideal start for Krunal Pandya.

21:00 IST: OUT! Wicket! Big man Gayle departs for 50 runs. Mumbai finally get their man. A brilliant inning comes to an end. Cutting strikes in his first over itself just Markande did in his first over dismissing Rahul. KXIP 88/2 in 11.2 overs

20:50 IST: FOUR! Well played. Good position Gayle got into. Gets a boundary. Pandya tries to get some variation but too much on the leg side. Ishan Kishan should have stopped it though.

20:47 IST: SIX! Tossed up and Gayle hits the ball to the third tier. Enough time for Gayle to get underneath. Backs it up with a scoop shot over the mid off region for a four. After a slow start, he is making up with boundaries. 14 runs from the over. KXIP 72/1 in 9 overs

20:45 IST: Markande is back into action. He gave his team a crucial breakthrough in his first over.

20:38 IST: OUT! Markande strikes in his first over. Rahul has to go. Punjab lose their first wicket. A little bit short and Rahul hits it straight to JP Duminy's hands. KXIP 54/1 in 6.4 overs

20:35 IST: FOUR! Rahul pulls it across the leg side for a boundary.

20:34 IST: Mayank markande is the new bowler for Mumbai.

20:31 IST: FOUR! Flat, hard and one bounce for a six. He is getting into the groove now. Second boundary for him this over. A good over for Punjab. End of the powerplay now. KXIP 49/0 in 6 overs

20:25 IST: So far so good for Mumbai's Bumrah. Only 3 runs off the first five balls.  A superb yorker to finish the over. Good bowling display by the pacer. KXIP 37/0 in 5 overs

20:19 IST: 11 runs already off Hardik's first five deliveries. Pressure on him. Bowls a wide ball. Still a ball to go.

20:19 IST: FOUR! Gayle goes straight and times it perfectly well for a boundary. Hardly any bat lift and opens the face of it to get his boundary. Back-to-back boundaries for the big man. This time square on the offside boundary.

20:16 IST: Rahul has a wonderful batting technique. He times the ball really well. He is slowly building his innings.

20:15 IST: Hardik Pandya is the new bowler for Mumbai.

20:14 IST: Mitchell McClenaghan bowls an excellent over. Gayle is taking his time to settle in. Very unlike the Gayle we all know. Only one run off it. KXIP 17/0 in 3 overs

20:07 IST: SIX! What a shot. Tremendous hit. Straight bat and launches it over covers. Wow. That was some breathtaking shot. Pressure on the bowler

19:33 IST: Pollard misses out for Mumbai. Evin Lewis returns for them.

19:00 IST: Hello and welcome to the live match updates of the 34th match between Kings XI Punjab and Mumbai Indians in the Indian Premier League (IPL).

Kings XI Punjab's season has been about collective performance. They don't have the 'Orange Cap' or 'Purple Cap' holders in their ranks but everyone has chipped in with impactful performances as and when required.

'Universe Boss' Chris Gayle (252 runs) came into the tournament with a bruised ego and battered the bowlers into submission with two half centuries and a hundred. Rahul (268 runs) also showed why he is rated so highly with the fastest ever 50 in IPL.

Afghanistan's rookie mystery spinner Mujeeb ur Rahman, with an economy rate of 6.51 and seven wickets, has been nurtured well by skipper Ashwin, who has marshalled his resources well.

The pace duo of Ankit Rajpoot (7 wickets at 6.27) and Andrew Tye (9 wickets at 7.78) have also done the job for the Preity Zinta co-owned outfit.

For Mumbai, the primary reason for six defeats in eight matches has been poor start by openers along with new ball bowlers leaking too many runs in Powerplay overs.

While Suryakumar Yadav, with 283 runs from eight games, has performed decently after being promoted up the order, Caribbean left-hander Evin Lewis (194 in 7 games) has not been able to replicate his form in international matches.

Skipper Rohit Sharma (196 in 8 matches) has shuffled his own batting position but his inconsistency has also hurt Mumbai Indians big time.

A look at the statistics will reveal that they have got solid foundation in only two games of which they won the match against CSK.

The other problem that has plagued Mumbai has been the performance of their two all-rounders -- Kieron Pollard and Hardik Pandya.

With Pollard not fit enough to bowl, his contribution of 76 runs in 6 innings has been an issue. Hardik has also blown hot 'n' cold during the season with 111 runs, including a toiling 50 in the last game along with 11 wickets.

Left-arm pacers Mustafizur Rahaman (7 wickets) and Mitchell McLenaghan (9 wickets) have both been expensive at the start and back-end of the opposition innings with unimpressive economy rates of 8.34 and 8.66 respectively.

That has put immense pressure on Jasprit Bumrah (9 wickets at an economy rate of 7) and Hardik (11 wickets at 8.74).

The only silver lining for the Mumbai Indians this season has been the emergence of young leg-spinner Mayank Markande (11 wickets) . The teenager has shown admirable temperament against the biggest names.

However it will depend on the big guns as to whether IPL's most successful franchise makes it to the Play-Offs this time.