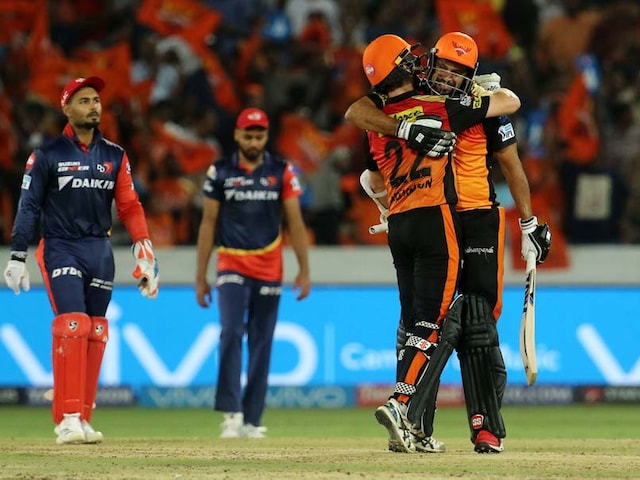 Delhi Daredevils paid the price for flawed team selection and poor fielding as Sunrisers Hyderabad pushed them towards exit door with a seven-wicket victory in an IPL encounter on Saturday. Yusuf Pathan (27 no off 12 balls) and skipper Kane Williamson (32 no off 30 balls) kept their calm surpassing the 164-run target in 19.5 overs on a tricky surface. Pathan's dropped catch by Vijay Shankar was one of the game-changing moments during the chase. Despite Amit Mishra's (2/19 in 4 overs) brilliant bowling, the lack of second specialist spinners hurt Delhi dearly as Avesh Khan (0/47 in 3 overs) and Dan Christian (0/37 in 3.5 overs) gave away 84 runs in less than seven overs which proved to be decisive. Sunrisers maintained their pole position with 14 points from nine games while Delhi after their seventh defeat are almost out of the competition. Only a mathematical possibility remains if they win all their remaining four home games.

Opener Alex Hales (45, 31 balls) was dropped by Maxwell at deep mid-wicket boundary off Avesh Khan's bowling when the batsman was on 9.

Avesh, however, got a rough treatment, when he was taken to cleaners with 27 runs coming off his second over with Hales hitting him for three sixes and Shikhar Dhawan (33 off 30 balls) the other.

It was Amit Mishra, who finally got the much need breakthrough with a brilliant delivery.

The delivery was a copybook leg-break that pitched on good length and turned sharply as it beat Hales' lunging willow to clip the off-stump. It was unplayable delivery as Hales looked in utter disbelief. Hales hit three boundaries and three sixes, adding 76 for the opening stand with Dhawan.

The India opener was the next to depart when he yorked himself tried to slog sweep Mishra and was clean bowled.

Earlier, Delhi Daredevils could not cash in on the brilliant platform laid by young Prithvi Shaw as Sunrisers Hyderabad restricted them to 163 for 5 in stipulated 20 overs.

Shaw smashed 65 off 36 balls but after scoring 95 in the first 10 overs, DD managed only 67 in the back 10 with the pitch getting slower and the odd delivery holding up.

Leg-spinner Rashid Khan (2/23 in 4 overs) was the most impressive bowler for Sunrisers as he put the brakes in the second half of the Delhi innings.

Shaw once again provided a blazing start, reaching to his second IPL half-century in only 25 balls. His innings had six boundaries and three huge sixes.

He teed off with six over long on off Sandeep Sharma and then lofted Shakib Al Hasan inside out for his second maximum.

The most fruitful over was the final one in the Powerplay where Shaw literally got stuck into Siddarth Kaul, hitting him for a six and three boundaries.

The 18-year-old is one of the cleanest hitters among the 'Gen-Next' players. With a slight backfoot trigger towards leg-stump, the Mumbaikar makes room and plays his shots all around the wicket. While there is a preference for straight hits, he is equally adept in hitting the cut shots and is not afraid to pull the short balls when the need arises.

Till Shaw was taking on the bowlers, his skipper Shreyas Iyer (44 off 36 balls) played the second fiddle to perfection during their 86-run stand.

Shaw was finally out when he tried to hit Rashid Khan against the turn, gifting a simple catch to Kaul at short third man.

Skipper Iyer was looking good for another half-century before his attempted flick shot off Siddarth Kaul's bowling was snapped by Shikhar Dhawan at deep mid-wicket.

Delhi's top run-getter in the season, Rishabh Pant (18 off 19 balls) was off-colour as Rashid trapped him leg-before.

It was Vijay Shankar (23 off 13 balls), who gave Bhuvneshwar Kumar, coming back from injury, the charge to take Delhi past 160-run mark.