IPL 2018: Hardik Pandya Has Transformed Himself As A Bowler, Says Brother Krunal 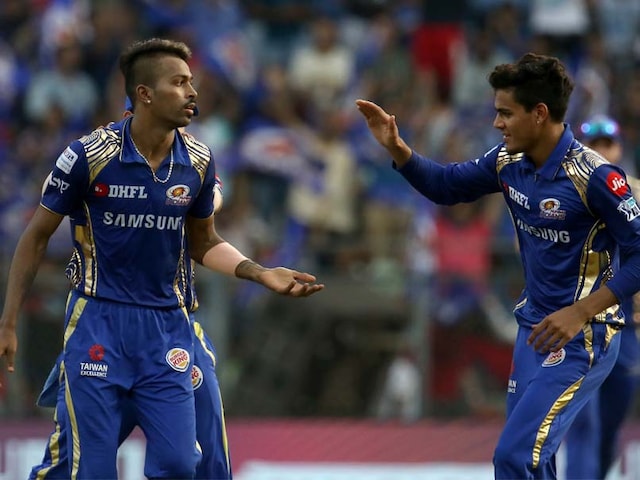 India and Mumbai Indians (MI) all-rounder Hardik Pandya produced a man-of-the-match performance in his team's 13-run win over Kolkata Knight Riders (KKR) in their Indian Premier League (IPL) clash on Sunday. After his stellar performance with both bat and ball, Hardik has earned plaudits from his elder brother Krunal Pandya. Krunal said he was happy to see his brother's improvement as a bowler. "Really happy for him. He has transformed himself as a bowler. Improved as a bowler. That's a great sign. Whatever he was bowling last and this year, he is using his brains. He is also batting and bowling well. I am happy for him", Krunal was seen speaking in a video shared by Mumbai Indians' official Twitter account.

The #MI all-rounder talks about his final over conversation with captain @ImRo45, MI's fighting spirit and his younger brother @hardikpandya7 getting the Purple Cap

Hardik's 2/19 figures against KKR in four overs pushed him to the top of the highest-wicket takers list in IPL 2018. Hardik now has 14 wickets in 9 matches so far at an impressive average of 16.78. Brother Krunal also has taken 9 wickets and is placed 12th in the list of highest wicket-taking bowlers this season of IPL.

KKR had needed 23 runs off the last over and Krunal bowled well to ensure Mumbai edged Kolkata by 13 runs.

Praising Mumbai's never-say-die attitude, Krunal said, "MI are known for their fighting spirit. We will take one game at a time. We want to win games. It was a great show by all the players."