The incident was reminiscent of the 2011 World Cup final at this very venue. 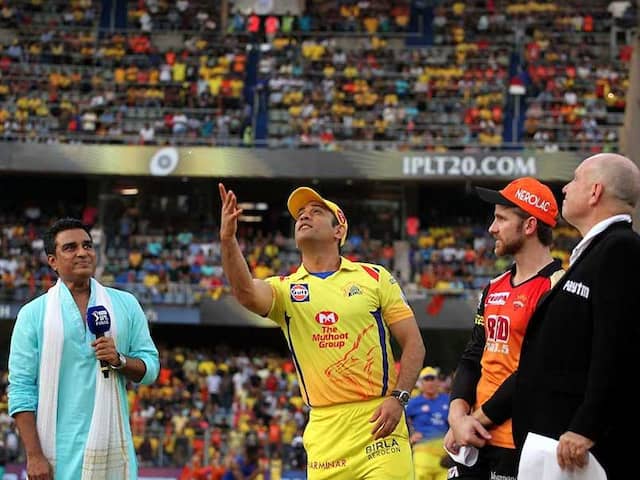 A clearly nervy Sanjay Manjrekar did not know who tossed the coin and who called.© BCCI

It would not be an exaggeration to say that there's not even a single dull moment when MS Dhoni is on the field. From pretending to take a nap to scaring Ravindra Jadeja with an attempt to throw the ball at him, the 36-year-old lights up a game with his sheer presence. There was a lot of pandemonium when Dhoni and Kane Williamson came out for the toss for the IPL 2018 final being played between Chennai Super Kings and SunRisers Hyderabad at the Wankhede Stadium in Mumbai. A clearly nervy Sanjay Manjrekar did not know who tossed the coin and who called. It was eventually a laughing Dhoni who resolved the issue. Manjrekar kept getting it wrong as he kept asking Dhoni rather than Williamson, who meanwhile as soon as the coin landed signalled to his teammates that they were batting first.

This incident was reminiscent of the 2011 World Cup final at this very venue.

"We will bowl first. Looking at our bowling and batting, our batting will have to look to take extra pressure. The journey has been good. It is not something that you can always predict. There were challenges thrown at us. We had a core group of players with us but other than that it was a fresh squad. We have one change. Karn Sharma comes in for Harbhajan Singh," Dhoni said after the confusion was resolved.

Nerves will play a big role as Chennai Super Kings and SunRisers Hyderabad look to outdo each other and regain the coveted IPL crown when they square off in what promises to be a humdinger of a summit clash.

The two finalists locked horns thrice in the ongoing IPL season with Chennai Super Kings winning on all three occasions. The much awaited IPL 2018 final will typically be a clash between SRH's bowling and CSK's batting. With the likes of Bhuvneshwar Kumar, Rashid Khan and Siddarth Kaul, SunRisers Hyderabad boast of a superb bowling attack whereas the two-time champions CSK have a star-studded batting line-up consisting of Shane Watson, skipper Dhoni, Ambati Rayudu and Suresh Raina.