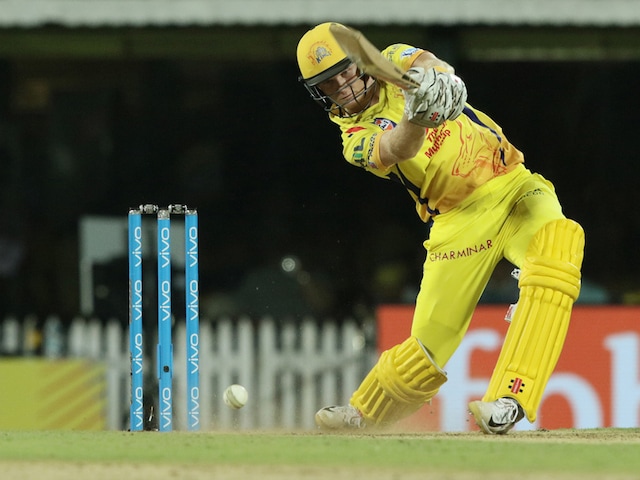 Sam Billings played a stellar knock of 56 runs to guide Chennai Super Kings (CSK) to a 5-wicket win over Kolkata Knight Riders on Tuesday at the MA Chidambaram Stadium, Chennai. Chasing a mammoth total of 202, Billings showed his batting prowess after hitting 5 sixes and 2 fours helping his team cross the finishing line. Shane Watson (42) and Ambati Rayudu (39) gave the hosts a perfect start in their run-chase. Chennai were cruising before losing Watson in the 6th over with 75 runs on the board. Rayadu followed suit after Watson's dismissal. Kolkata took control in the middle overs after which MS Dhoni (25) built on a partnership with Billings. (SCORECARD)

Andre Russell's unbeaten 88 took Kolkata Knight Riders (KKR) to 202/6 in 20 overs against Chennai Super Kings (CSK) in their Indian Premier League (IPL) clash on Tuesday. After a mellow start, Russell went on the offensive, hitting 11 sixes in the process. He spared no Chennai bowler as he hammered them equally all over the park. Every six of his silenced the home crowd. Robin Uthappa (29) and captain Dinesh Karthik (26) chipped with decent contributions helping their team reach a 200+ score. Chennai skipper used seven bowlers as they were getting hit for boundaries quite often. Shane Watson returned with bowling figures of 2/39 while Harbhajan Singh (1/11), Ravindra Jadeja (1/19) and Shardul Thakur (1/37) shared a wicket each between them. The batting side kept losing wickets at regular intervals but the batsmen ensured they kept the run-rate going.

23:45 IST: Dwayne Bravo is the new man in. Last match's hero. Can he take Chennai to the finishing line?

23:42 IST: FIFTY up for Sam Billings. 21 balls is all he took to keep CSK in the hunt. Standing ovation for him.

23:27 IST: Piyush Chawla is maintaining his line and length.

23:18 IST: SIX! After his catch dropped, Billings makes the bowler pay. A long six over mid off.

23:17 IST: DROPPED! Uthappa drops the catch right on the edge of the circle. Billings survives.

23:11 IST: FOUR! That is smashed. Could be a start of an onslaught by Dhoni. He has absolutely smashed that. No chance for long on or long off.

23:06 IST: FOUR! Super shot by Billings. They need many more of such shots.

23:05 IST: A lot riding on Dhoni now. He is finding it difficult to connect the ball at the moment. The run-rate is going up every passing ball.

23:01 IST: WICKET! Raina succumbs to pressure from the KKR bowlers. Chennai Super Kings lose their third wicket as Raina departs for 14 vs KKR | CSK 101/3 in 11.3 overs

22:51 IST:  A good fightback by Kolkata bowlers. Chennai have lost their steam after Watson and Rayadu dismissals. CSK 90/2 in 10 overs, need 113 more runs in 61 balls

22:38 IST: After Watson's dismissal, KKR have fought back in this match halting the momentum.

22:21 IST: SIX! Watson is taking on the bowlers. Superb-looking shot.

22:21 IST: FOUR! Back of a length by Curran. Watson muscles it to the boundary.

22:05 IST: SIX! Watson pumps it another one long on. What a shot. Watson is making it count.

21:58 IST: Shane Watson, Ambati Rayudu are out in the middle for Chennai. R Vinay Kumar begins the proceedings for Kolkata.

21:15 IST: 50-run partnership up between Dinesh Karthik and Andre Russell.

21:12 IST: SIX! What connection with the bat. Sweet sound from the willow. Times it perfectly to launch it over long off boundary. Back-to-back sixes for him off Shardul's delivery. KKR 137/5

20:42 IST: Kolkata Knight Riders lose their fourth wicket as Robin Uthappa departs for 29 vs CSK. A crucial wicket for Chennai. Utter chaos at the middle. Uthappa is run out. Really unlucky to get dismissed that ways. KKR 81/4 in 8.2 overs

20:38 IST: WICKET! Kolkata Knight Riders lose their third wicket as Nitish Rana departs for 16 vs CSK. No need for Rana to play that shot which hit his pads. An easy catch for Dhoni. KKR 80/3 in 8.1 overs

20:30 IST: Despite losing two early wickets, KKR have kept the run-rate going. They are scoring at more than 10 runs per over.

20:26 IST: SIX! Uthappa is striking it cleanly for KKR. The six went 88 metres. Back-to-back sixes for him. What an over for KKR.

20:23 IST: FOUR! Misfield and its a boundary for Lynn. Should have been stopped. Jadeja seems livid.

20:16 IST: Ravindra Jadeja is the new bowler for CSK. Good over by the India spinner.

20:15 IST: FOUR! Watson is leaking boundaries. Uthappa beats the slip as the thir man is quite square. KKR 33/1

20:14 IST: FOUR! Beats the man in the outfield for a boundary. A good shot by Lynn. Outside leg and Lynn connects it well. KKR 29/1

20:12 IST: FOUR! Loosener by Shane Watson. Lynn destroys the poor delivery. Anything on oof stump and the ball races to the boundary. KKR 25/1

20:05 IST: SIX! Back-to-back maximums for Narine. What a shot by Narine. Superb shot. He strikes it so cleanly. Clean as you like. Good first over for the batting side. KKR 18/1 in 1 over

20:02 IST: FOUR! Lynn clears the ball inside the circle. Anything outside off stump is bread and butter for him. KKR 4/0

20:00 IST: Sunil Narine, Chris Lynn are the two openers for KKR. Deepak Chahar begins the proceedings for CSK with the ball.

The captains are ready, the commentator for the toss is ready but the officials, apparently, aren't here yet

19:27 IST: There is a little bit of grass on the pitch. Kevin Pietersen says the team winning the toss will look to chase on this pitch.

19:07 IST: Hello and welcome to the live updates of IPL's fifth match between Chennai Super Kings and Kolkata Knight Riders.

Pitted against defending champions MI, CSK looked down and out before Dwayne Bravo's heroics helped the team pull off a stunning heist. Barring Kedar Jadhav and Ambati Rayudu, the rest of the batting failed to get going and skipper MS Dhoni will hope for a quick turnaround. Back in their den, the CSK players will aim to get going in front of an adoring crowd. The home favourite Dhoni will be expected to lead from the front while Suresh Raina would love to shake off the failure in the MI game. Jadhav suffered a hamstring pull during the opening game and has been ruled out of IPL 2018.