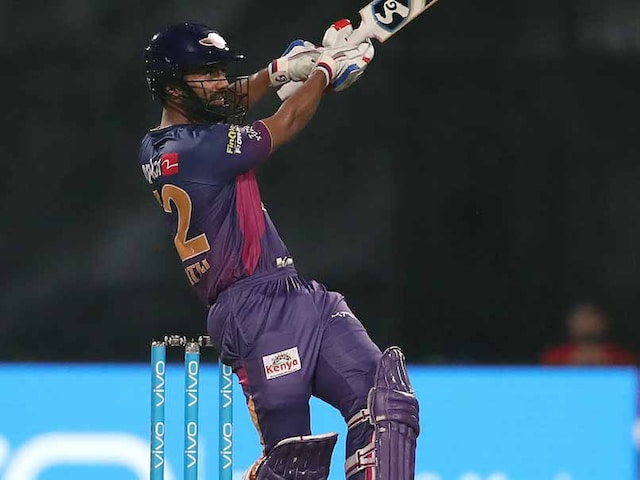 Powered by Rahul Tripathi's 93 (52) Rising Pune Supergiant (RPS) overhauled the total of 155/8 vs Kolkata Knight Riders (KKR) in 19.2 overs in an Indian Premier League (IPL) match at the Eden Gardens on Wednesday. Ajinkya Rahane (11) and Steve Smith (9) falling early in the run-chase had Pune worried, but Tripathi took on the responsibility and blasted the bowlers all round the park and helped his team beat the two time champions at their home turf. He also registered his highest IPL score. Powerful and clean hitting by Tripathi took the Kolkata bowlers to the cleaners and damaged their economy rate. For Kolkata, Chris Woakes finished for 3/18 in his four overs. After this win, Pune are placed third on the points table with 14 points and Kolkata remain at the second position with 14 points. Rahul Tripathi was adjudged the Man of the match. (SCORECARD)

Catch all the highlights of the match between Kolkata Knight Riders and Rising Pune Supergiant.

23:40 IST: Thank you for reading our live blog. Please do tune in back tomorrow for the 42nd match of Indian Premier League.

23:38 IST: Rahul Tripathi is adjudged the Man of the match.

23:06 IST: With four overs to go, Supergiant need another 17 runs to win this contest.

22:56 IST: Out! Sunil Narine dismisses Ben Stokes. Looking to put the ball away on the on-side, Stokes edges the ball up in the air as Narine completes the catch. Pune stand at 131 for four. Need 25 runs in 39 balls.

22:51  IST: SIX!!! Three sixes in a row from Tripathi. Pune is in a hurry to end the game and improve their net run rate. Tripathi leading from the front.

22:45 IST: Four! Poor fielding from Chris Woakes as he fails to collects the ball on the boundary.

22:43 IST: Decent first over from Kuldeep, concede only five runs.

22:38 IST: Four!! Down on one knee, Ben Stokes reverse-hits Narine for a boundary.

22:31 IST: Clean bowled!! Chris Woakes gets right through the defence of Manoj Tiwary and the stumps are all over the place. Pune stand at 88 for three, 8.2 overs.

22:29 IST: Four! Tripathi scoops Narine for a boundary and brings up his half century. Pune stand at 88 for two, eight overs.

22:19 IST: Clobbered! Short delivery from Coulter-Nile and Tripathi flats hits the ball for a maximum.

22:15 IST: Four! Tripathi shows no signs of slowing down.

22:08 IST: Four! Now Smith gets an inside edge and it runs away for a boundary.

22:05 IST: Four! And Six!! And another four! Rahul Tripathi is on fire!! Expensive over from Coulter-Nile.

21:57 IST: Decent start from Pune, finish seven for zero at the end of the first over.

21:55 IST: Four! Wide from Coulter-Nile and Tripathi edges the ball past the slip for the first boundary.

21:53 IST: Ajinkya Rahane and Rahul tripathi is opening the batting line up for Pune.

21:36 IST: Out! Good slower ball from Ben Stokes, Coulter Nile outside edges the ball to backward point. Kolkata stand at 152 for 8.

21:30 IST: Six! Suryakumar on one knee, sweeps the ball for a maximum.

21:29 IST: Four! Making room for himself, Suryakumar slams the ball for a boundary on the off side.

21:28 IST: Four! Slower ball from Unadkat, Suryakumar shuffles and puts the ball away for a boundray.

21:22 IST: Six! Picking up the slower ball early, Suryakumar gets into the position and fires the ball for a maximum.

21:16 IST: Out! Looking to play on the leg side, Grandhomme edges the ball to the Washington Sundar, good slower ball from Unadkat. Kolkata 119 for six.

21:12 IST: After 16 overs, Kolkata stand at 199 for 5. Suryakumar yadav and Colin de Grandhomme at the crease for Knight Riders.

21:11 IST: Four! Wide from Imran Tahir and Grandhomme slices it for a boundary.

21:06 IST: Four! Little bit of width from Christian, Grandhomme slams the ball for a boundary through extra covers.

21:05 IST: Out! Full length from Christian, Pandey hits the ball straight down the throat of Ajinkya Rahane.

21:04 IST: Brilliant bowling from Pune as they are not allowing the batsmen to settle.

21:00 IST: Four! Attempting a yorker, gets it wrong and Grandhomme clubs it through extra covers.

20:56 IST: Four! Pandey slashes the ball past through the short third man for a boundary.

20:53 IST: Six! Down on one knee, Grandhomme clubs Tahir for huge maximum.

20:50 IST: Four! Short from Thakur, Pandey pulls it away for yet another boundary.

20:49 IST: Ohhh! Close one, Manoj Tiwary takes an aim at the stumps, ball misses the stumps and hits the stump mic and goes for a boundary.

20:36 IST: Six! Manish Pandey times the ball well enough for it to cross the boundary.

20:27 IST: Out!! Kolkata in trouble as Gambhir departs for 24 as Ajinkya Rahane completes a catch on the boundary line.

20:22 IST: Four! Right in the slot from Ben Stokes, Gautam Gambhir slams the ball on the leg side.

20:18 IST: Four! Down the track and straight down the ground. Sheldon Jackson smacks Washington Sundar for a boundary.

20:11 IST: Four! Gives himself room, and slams the short ball for a boundary on the off-side.

20:06 IST: Four! Straying on the pads, Gambhir guides Ben Stokes on the leg side for the first boundary.

20:04 IST: Out!! Brilliant first over from Unadkat. A wicket maiden for Pune as Sunil Narine departs for a duck. Kolkata zero for one after the first over.

19:42 IST: Supergiant warming up before their away game against Knight Riders.

19:41 IST: Knights warming up before their game against the Supergiants.

#IPL Match 41: The two-time champions are out in the middle warming up for KKRvRPS pic.twitter.com/iJc5B7xy7U

19:04 IST: Hello and welcome to the live blog of the match between Kolkata Knight Riders and Rising Pune Supergiants at Eden Gardens.

KKR on their part were at the receiving end of a century when David Warner absolutely destroyed their bowling in a match-winning knock.

KKR would be keen to get the points that would ensure their moving ahead, so this will be a match they would like to win. But RPS surely would have something to say about that.