IPL 2017: It's Hard For A Captain To Speak After Such A Performance, Says Virat Kohli

Virat Kohli rules out any outside chance of Royal Challengers Bangalore making it to the IPL 2017 play-offs with only four games remaining. 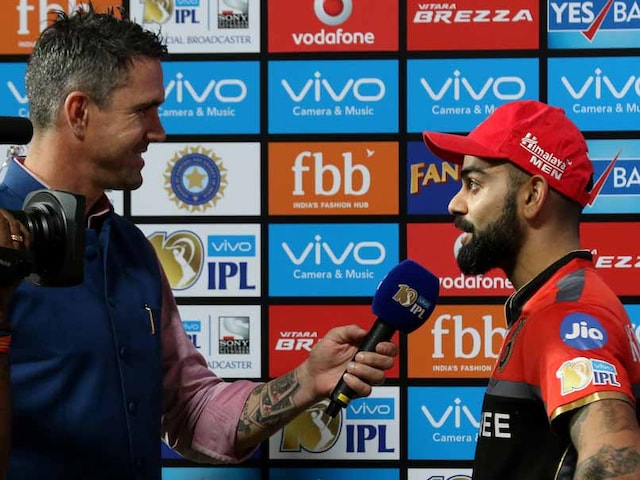 Virat Kohli speaks to Kevin Pietersen after the match.© BCCI

His team all but out of contention for a place in the IPL play-offs, a dejected Royal Challengers Bangalore (RCB) skipper Virat Kohli found his team's horrendous performance inexplicable. "I think it's for everyone to see we lost that game. It's hard for a captain to stand here and speak after a performance like this," Kohli said at the post-match presentation ceremony after going down to Rising Pune Supergiant by 61 runs.

The Indian skipper ruled out any outside chance of making it to the play-offs winning the remaining four games. "We are pretty much not in the race for the Playoffs. All we can do is enjoy the four remaining games," said Virat Kohli.

Not one to mince words, Kohli said that it was RCB which lose the match rather than Pune winning it. "We lost the game rather than them winning it. But got to learn and move on from these kind of experiences," Kohli added.

Having lost seven out of 10 matches, including getting bundled out twice and nine wickets down in back-to-back games, Kohli said there could be a number of reasons behind RCB's dismal performance.

"Could be a few reasons, expectations, people looking at us as a good batting side that made the Playoffs last year. Can't really pinpoint something -- could be hesitation to get out, to get runs," he said.

Comments
Topics mentioned in this article
Royal Challengers Bangalore Rising Pune Supergiant Virat Kohli IPL 2017 Cricket
Get the latest Cricket news, check out the India cricket schedule, Cricket live score . Like us on Facebook or follow us on Twitter for more sports updates. You can also download the NDTV Cricket app for Android or iOS.