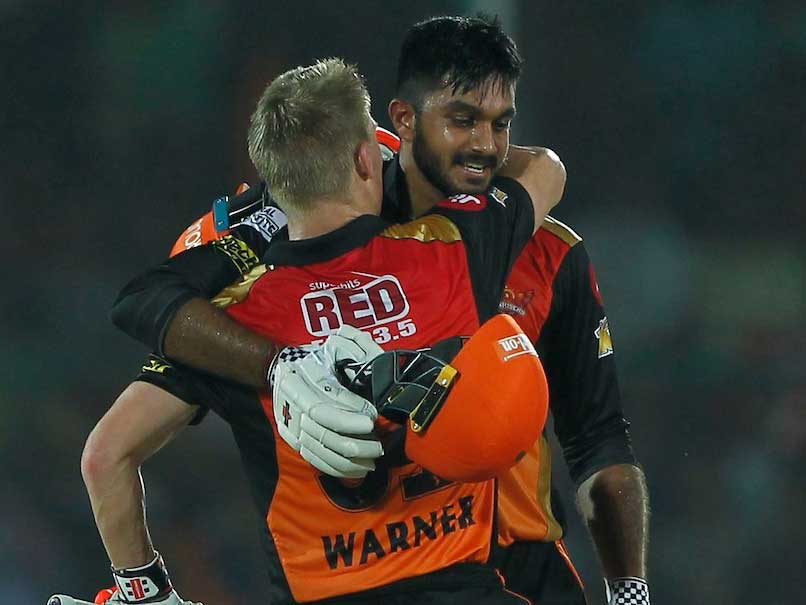 Warner, Vijay had put together an unbeaten 133-run partnership for the third wicket© BCCI

Defending champions Sunrisers Hyderabad cruised into the Indian Premier League play-offs with an easy eight-wicket victory over Gujarat Lions riding on a thoroughly professional team performance. After pacer Mohammed Siraz and Afghan leg-spinner Rashid Khan played a key role in dismissing Lions for a paltry 154 in 19.2 overs despite a century opening stand, skipper David Warner (69, 52 balls) and Vijay Shankar (63, 44 balls) anchored the chase to perfection with 11 balls to spare. Sunrisers thus finished their league campaign with 17 points from 14 games.

Gujarat Lions' forgettable season after a questionable team composition for the better part of the tournament saw them finish the engagements at second last place with 8 points.

It was a 133-run third wicket stand between Warner and Tamil Nadu one-day captain Shankar that sealed the issue after Shikhar Dhawan (18) and Moises Henriques (4) were dismissed cheaply.

They never showed any urgency yet got their boundaries without ever letting the scoreboard pressure bother them. Warner hit nine boundaries while Shankar also smashed nine fours, matching his skipper stroke for stroke.

In fact, such was the ease that Sunrisers batsmen didn't hit a single six but the 23 boundaries were enough for their successful run chase.

Pradeep Sangwan was easy pickings for Shankar as the Sunrisers batsman hit him for some impressive pull shots whenever he pitched it short.

Leg spinner Ankit Soni (0/31 in 2.1 overs) -- one of the questionable selections this season -- was hammered whenever he pitched it short. Soni, who couldn't even make it to Mumbai U-23 squad, looked out of place throughout the tournament.

Fittingly, Warner disdainfully smashed him over his head to finish off the match.

Earlier, Siraz and Rashid Khan triggered a batting collapse to skittle out Gujarat Lions for 154 in 19.2 overs after a century-plus opening stand between Ishan Kishan and Dwayne Smith.

But in a baffling collapse, Lions lost all 10 wickets for an addition 49 runs in the last 10 overs after a whopping 105 in the front 10.

Initially, it was Kishan, who was carting the bowlers all over the park, hitting five fours and four sixes in all. It wasn't the best innings but he was still managing to find the boundary.

Anything short on his pads was pulled imperiously. Smith on his part also hit a couple of sixes off Mohammed Nabi and Rashid Khan.

The opening stand raised visions of a big total but a Rashid flipper saw Smith wrapped on the pads going for a pull-shot only to be adjudged leg-before.

Kishan top-edged an ambitious pull-shot off a Siraz delivery only to be pouched by Naman Ojha.

It was the start of a baffling collapse with some atrocious shot selection from the likes of Suresh Raina and Dinesh Karthik. From 120 for 1, suddenly Lions slumped to 120 for 4 and Sunrisers took full use of the opportunity that they got.

The mini-slump turned out to be decisive as only Ravindra Jadeja (20 no, 14 balls), remained stranded on one end.

The now famous googly from Rashid accounted for Aaron Finch (2) while James Faulkner and Pradeep Sangwan were cleaned up by Siraz.

Comments
Topics mentioned in this article
Gujarat Lions Sunrisers Hyderabad David Warner Vijay Shankar Suresh Raina Green Park, Kanpur IPL 2017 Cricket
Get the latest updates on Fifa Worldcup 2022 and check out  Fifa World Cup Schedule, Stats and Live Cricket Score. Like us on Facebook or follow us on Twitter for more sports updates. You can also download the NDTV Cricket app for Android or iOS.