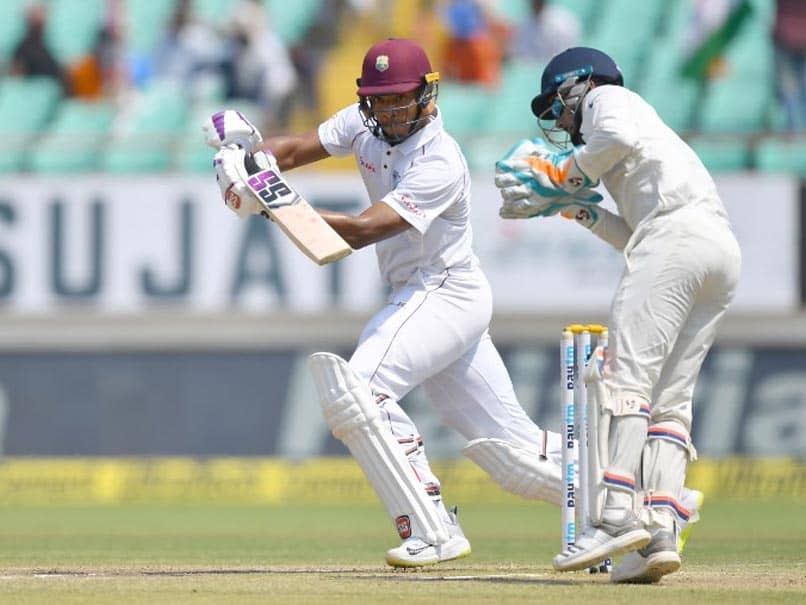 Kieran Powell top-scored for the Windies in their second innings against India.© AFP

The Windies surrendered meekly to India in the opening Test of the two-match series at the Saurashtra Cricket Association Stadium in Rajkot on Saturday. The Windies batsmen fell like ninepins as the Indian bowlers ran riot. India, on the other hand, put in a brilliant all-round performance to register their biggest innings win in Tests. Stand-in captain Kraigg Brathwaite expressed his unhappiness at the way the batsmen performed and urged his teammates to learn from India's performance. "I think if we can learn from them (India), that will put us in good stead going forward," Brathwaite said in the post-match ceremony.

"Obviously a few nerves, it's Test cricket so it is never easy but we need to take a page out of their (India) book and take that into our batting. Trust in defence and obviously when you attack, go 100 percent as well," Brathwaite further added.

Captain Brathwaite further stated that the batsmen in the team needed to trust in their defence more and not just rely on playing aggressively.

"Going forward what we need to do is along with the attacking shots, trust in defence. I think that's the key," Brathwaite remarked.

"Obviously when the field goes back, it's a matter of still staying positive in defence also and putting away the bad balls, stroking the ball along the ground for singles. I just don't think we didn't trust our defence as much as we should have," the right-hand batsman mentioned.

The tourists felt the absence of star bowlers Kemar Roach and Jason Holder with three Indian batsmen scoring centuries. Brathwaite was confident of Roach's return but was not so sure about regular skipper Holder.

"Kemar will back but not 100 percent sure (about Jason). In a couple of days we will come to know," he said.

"It's just for us to bounce back. Obviously it's not the start we wanted, but we can bounce back," asserted Brathwaite.

Windies, after losing the first Test by an innings and 272 runs, will face India in the second and final match of the series in Hyderabad.