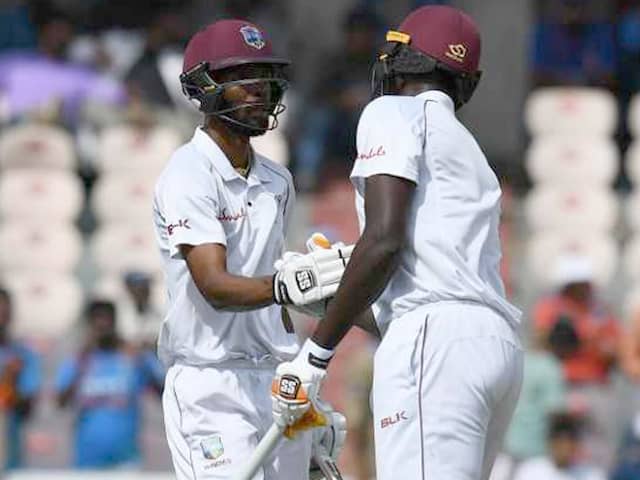 Riding on brilliant half-centuries from Roston Chase and Jason Holder, Windies ended the first day of the second and the final Test against India on 295/7 at the Rajiv Gandhi International Stadium on Friday. Windies captain Jason Holder won the toss and elected to bat. Indian bowlers starred with the ball once again as they ran through the Windies top-order. However, a 104-run partnership between Chase (98*) and Holder (52) steadied the Windies innings and helped them reach a respectable total at stumps. Chase, who scored 137 to deny India a victory in a Test match in Jamaica back in 2016, showed the much-needed application with requisite technique as Indian bowlers struggled after polishing off the top half for only 113 runs.

Umesh Yadav (3/83 in 23 overs) bowled his heart out on a good batting track while left-arm wrist spinner Kuldeep Yadav (3/74 in 26 overs) was also impressive during the first two sessions.

It seemed good enough till tea but the lack of a fifth bowler did have its effect in the final session as the two senior spinners Ravichandran Ashwin (1/49 in 24.2 overs) and Ravindra Jadeja (0/69 in 20 overs) could not dismiss Chase in the final session.

However, it was India, who had started the post-lunch session on a dominant note with signs that another batting debacle from the Caribbeans looking imminent.

Shimron Hetmeyer (12) offered no stroke to a googly and was adjudged plumb in-front. Sunil Ambris (18) played a loose shot as the Caribbeans were left stuttering at 113 for five.

Chase and Shane Dowrich (30) then added 69 runs for the sixth wicket before Umesh got the ball to reverse trapping the keeper leg-before. While the umpire initially gave not out, skipper Virat Kohli had a successful DRS review.

Earlier, Ashwin and Yadav struck early in the session as West Indies lost their top-order in the first session in which they scored 86 runs.

At the stroke of lunch, Shai Hope (36) was dismissed by Yadav as India gained the upper-hand.

Opener Powell, who scored 83 in the second innings at Rajkot in the first Test, struck four boundaries. He successfully reviewed a leg-before call off Ashwin's delivery as TV replays showed a big inside edge.

But Powell did not survive long as Ashwin flighted one and the batsman, trying the inside-out lofted drive, failed to get the elevation to be caught by Ravindra Jadeja at cover.

Powell's opening partner Brathwaite showed better application compared to the first Test as he was ready to dig in his heels and defend doggedly.

However, not scoring runs did put pressure as he looked clearly uncomfortable at not being able to pick Kuldeep's wrist-spinners. In fact, he was facing problems with Kuldeep's incoming delivery -- the stock ball for a chinaman.

One such delivery ended his 68-ball vigil with a delivery that spun sharply into Brathwaite as the batsman played to a wrong line. Youngsters Hope and Shimron Hetmeyer (10 batting), however, batted with grit, punishing the odd loose balls for a boundary.

Both were ready to defend Ashwin off the front-foot primarily and it worked to their advantage as they added 34 runs for the third wicket. The stand-out shots of the first session were a couple of back-foot punches by Hope off Umesh Yadav's bowling.

He also hit a front-foot cover drive before Umesh angled one in to get him leg before.

Jason Holder India vs West Indies 2018 Cricket India vs West Indies, 2nd Test
Get the latest Cricket news, check out the India cricket schedule, Cricket live score . Like us on Facebook or follow us on Twitter for more sports updates. You can also download the NDTV Cricket app for Android or iOS.