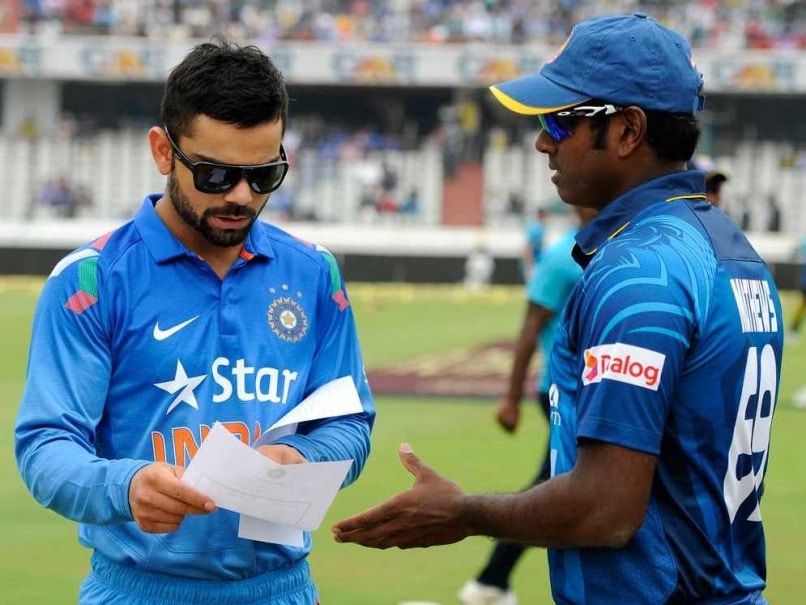 Sri Lanka captain Angelo Mathews (R) congratulated his India counterpart Virat Kohli for his ton in the final ODI. Mathews also said his team will bounce back from the 5-0 drubbing in India.© BCCI
Ranchi:

Soundly thrashed in the ODI series against India, Sri Lanka want to flush the disappointment out of their system as soon as possible, said skipper Angelo Mathews, insisting that there are some positives to take home despite the 0-5 drubbing. (Match report | Scorecard | Highlights | Pics | Series recap)

"Now we just got to flush it out of the system and take the England series on and from there move on," Mathews told reporters after the three-wicket loss in the fifth and final ODI on Sunday night. (Amid ruins, how Angelo Mathews stood out in the final ODI)

"We wanted to give opportunities to some of the new comers. We did not have some of the senior players. We wanted to see who responded best. The way (Lahiru) Thirimanne batted, I'm extremely pleased. He got his job in the last two games but I think we still have to improve in all the three departments," he said.

Mathews rejected suggestions that their World Cup preparation had been derailed due to the one-sided result. On the contrary, he felt the series gave them an opportunity to identify their World Cup-bound players. (India consolidate No. 1 ranking after thrashing Sri Lanka)

"We have figured out who are our players going to be and we gave them opportunities we wanted to try out. Playing in India is always special so we wanted to know who the guys are under pressure. We have an idea now," he said.

Mathews struck an unbeaten 139 as Sri Lanka put up a competitive 286/8 after opting to bat but Indian skipper Virat Kohli's 139 not out outshone the visiting skipper's knock.

"It was a competitive game. We improved quite a bit from the last four games. It was tough to bat on and the batters had to dig deep and get a good score to give something to bowl at. I thought we did that but our bowlers were a bit too wayward," he said.

"I am pretty pleased with the way I batted. There were a lot of positives especially with the way Thirimanne batted. It was not the easiest wicket to bat on. It was turning quite a lot. It was stopping and going up and down but we managed to get 286. So it was a good batting display," Mathews, who was adjudged man of the match, added.

Giving credit to Indian skipper Virat Kohli for holding the innings together, he said: "We tried to get him out as soon as he came in. We kept our fielders in, we tried but we failed. Kohli batted brilliantly and unfortunately we could not stop him," he said on Kohli.

Sri Lanka now return home for a seven-ODI series against England that will begin in Colombo on November 26.

Comments
Topics mentioned in this article
Sri Lanka Cricket Team India Cricket Team Angelo Mathews Ind vs SL, 2014-15 Cricket
Get the latest updates on IPL Auction 2023 and check out  IPL 2023 and Live Cricket Score. Like us on Facebook or follow us on Twitter for more sports updates. You can also download the NDTV Cricket app for Android or iOS.