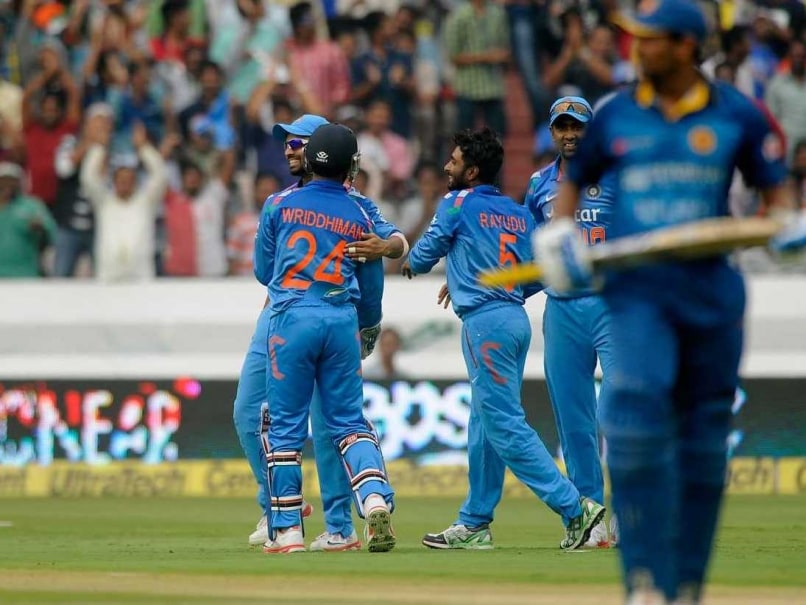 India routed Sri Lanka in the five-match ODI series that ended in Ranchi on Sunday. More than losing by this margin, chief selector Sanath Jayasuriya is appalled by the sheer lack of a fight from the Lankans. With the World Cup just months away, the former cricketer felt a better performance against the defending champions was a legitimate expectation. (Series recap)

The Sri Lankan team - asked to fill in after West Indies pulled out - were outclassed by world No. 1 India in every department of the game. Jayasuriya said he never expected a string of wins from his team but the random surrender in each of the five matches was a nightmare. (Sri Lankan captain determined to flush out disappointment)

"India is a bad dream and it is not the first time we have gone through a series like this," Jayasuriya told ESPNCricinfo after the fifth ODI on Sunday. "I was not expecting miracles for Sri Lanka to win the series in India and all that kind of thing. What I expected was good, competitive cricket."

For someone who punished Indian bowlers consistently during his heydays, Jayasuriya was bitterly disappointed that none of the Sri Lankan batsmen were able to play long innings.

"If we are to play competitively, somebody had to bat a long innings like the Indian batsmen were doing. One of the top four needed to bat for 40 overs," said the former explosive batsman who had hit seven centuries - including a 189 - against India.

While Jayasuriya may have had an impeccable record against India, the next generation of Sri Lankan cricketers seem to be but mere shadows of the legendary player-turned-selector. Jayasuriya's strategies have often been questioned by senior players like Mahela Jayawardene and Kumar Sangakkara.

While captain Angelo Mathews emerged as the series' highest run-getter with 339, no other player showed any signs of life. The shocking nature of the shoddy performance though may yet act as an alarm bell.

"This defeat in a way before the World Cup is like a blessing in disguise," said Jayasuirya. "Going through a bad patch I don't mind that because there are 90 more days to go. If the team can start peaking from the England and New Zealand series till the end of the World Cup, that would be ideal."

The veteran of 445 ODIs also urged fans to support the national side, instead of slamming them.

"It is not only the cricketers but all of us have to take the blame for the Indian defeat," said the 45-year-old former captain. "We can't push the players into a corner, this is the time we need to support them. The entire country needs to support them."

Sri Lanka will next play seven ODIs at home against England and will get a chance to right the wrongs ahead of the crucial World Cup which the team last won in 1996.Â  And while Jayasuriya had come out all guns blazing in that tournament, fans would hope the current crop of cricketers take inspiration from his performances and step up their game.

Comments
Topics mentioned in this article
India Cricket Team Sri Lanka Cricket Team Ind vs SL, 2014-15 Sanath Jayasuriya Angelo Mathews Kumar Sangakkara Mahela Jayawardene Cricket
Get the latest updates on IPL Auction 2023 and check out  IPL 2023 and Live Cricket Score. Like us on Facebook or follow us on Twitter for more sports updates. You can also download the NDTV Cricket app for Android or iOS.