Rohit Sharma's 173-ball knock of 264 had 33 fours and 9 sixes. He became the highhest individual scorer in ODIs and also the only player to score 2 double tons in the ODI format. 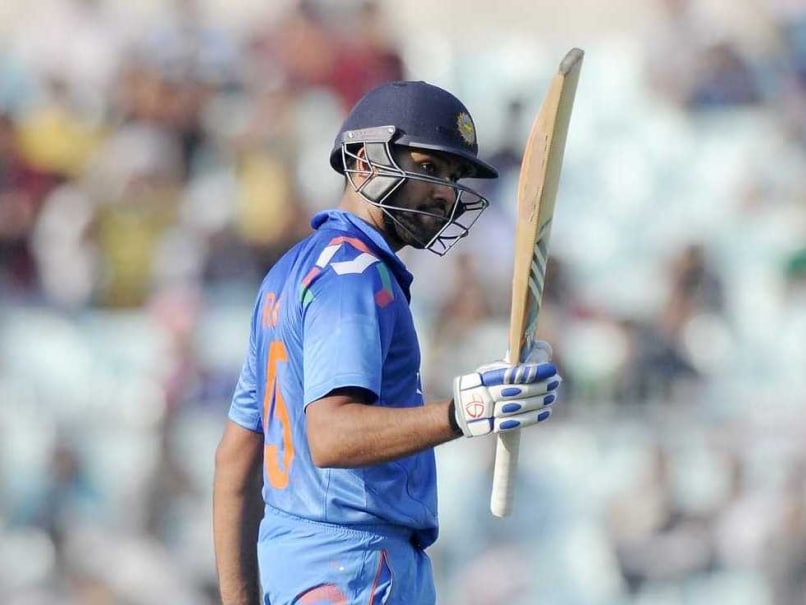 Rohit Sharma on Thursday created history by smashing the highest individual ODI score with a breathtaking knock of 264 as India thrashed Sri Lanka by 153 runs in the fourth cricket one-dayer to take a 4-0 lead in the five-match series, here on Thursday. (Scorecard | Highlights)

Courtesy Rohit's mayhem, India scored a mammoth 404 for five and then easily bowled out the islanders for 251 in 43.1 overs.

Returning after a 10-week injury lay-off, Rohit had everything going his way after being let-off on individual score of four. (Read: Rohit Says 300 Can Wait, Record 264 is Good Enough)

The Mumbaikar paced his innings to perfection as he first got set during the initial 50 runs before exploding against a clueless Lankan attack, as he scored his 264 off only 173 balls that had 33 fours and seven sixes. (Read: Dhoni Predicted Rohit's Historic Feat)

In the process, Rohit also broke compatriot Virender Sehwag's earlier world record of 219 runs, which he had set against West Indies in Indore, back in 2011. (Sachin Applauds Rohit , Hails His Record 264)

Rohit is also the only batsman to register two double centuries in ODIs and also now holds the record for highest number of boundaries during his innings. (Rohit Wins Rs 2.64 Lakh Cash Award for Eden Milestone)

The epic milestone was reached when Rohit hit an elegant cover drive off Nuwan Kulasekara to become the first batsman with two double hundreds in ODIs. (Will Tell My Kids I Was There, Says Virat Kohli)

Rohit did have 'Lady Luck' going his way as he was dropped twice after reaching his double hundred. (Rohit Says 'Not Tired' After Epic Knock)

The stylish right-hander was all set to carry his bat through before he was holed out in the long-off region off the final delivery of the Indian innings.

Fittingly, he received a 'Guard of Honour' from his teammates, who stood on both sides outside the dressing room with spectators also giving him a standing ovation.

It couldn't have been a more memorable innings on the 150th anniversary of the hallowed ground which has seen many outstanding individual performances.

Rohit's magnificent knock will rank among the very best played at this ground by the likes of VVS Laxman, Mohammed Azharuddin, Sachin Tendulkar to name a few.

The fifth and final match of the series will be played at Ranchi on November 16.

Stand-in captain Virat Kohli, the other day, termed Rohit as the 'X-factor' going into the World Cup and was vindicated after a knock which was class act.

405 was never going to be easy after Lanka lost their first wicket for naught with pacer Umesh Yadav giving the breakthrough by claiming Perera (0) in the second ball.

Yadav next took the big scalp of Jayawardene cheaply as Lanka were 42/3 as the victory looked very near.

Skipper Angelo Mathews was the top-scorer for the visitors with 75 from 68 balls (9x4, 1x6) and shared 118 runs with Lahiru Thirimanne (59) but it was too little looking at the monstrous target.

Yadav (2/38) once again was the pick of Indian bowlers even as Dhawal Kulkarni decimated the middle and lower order with best figures of 4/34. Stuart Binny and Akshar Patel too chipped in with a couple of wickets each.

On any given day, and on any surface, 264 was once considered a fighting ODI target.

And as it turned out, Lankans could not even get past Rohit's individual score and were bundled out for 251 in 43.1 overs to concede an embarrassing defeat.

The innings was not only a mix of elegance, class and timing but luck too played a big role with Sharma tumbling records after records making the Lankans look like school boys.

If the ground was 'Very Very Special' for VVS Laxman after his career-defining 281, Rohit, who had made his Ranji debut here too made this his second 'home' having scored hundred on Test debut.

Incidentally, the Mumbaikar, who scored 109 in the last IPL here, has hundreds in all the three formats here, and today he had the record score in his first ODI appearance at Eden Gardens.

The batsman used his wrists beautifully to the angling Eranga deliveries and cut anything when provided with a bit of width.

Thanks to wayward bowling by Lankans, Rohit was particularly ruthless in the 'Batting Powerplay' that fetched India 57 runs as he smacked the bowlers all around the park before taking a deft single to deep square leg to notch up his fifth ODI century, his first at this venue.

When Lankans batted, only time when they looked like putting up a fight was during the Mathews-Thirimanne partnership that yielded 118 runs.

It was young Akshar, who showed good temperament to get the opposition captain out after being deposited into the deep mid-wicket stands off the previous delivery.

He bowled one that drifted in and Mathews who reached too close to the pitch of the delivery was beaten after the ball took an inside edge as Robin Uthappa whipped the bails in a flash.

Karn Sharma's (0/64 in 9 overs) bowling performance was an aberration as he went for 23 in an over where Thisara Perera (29) literally launched into him.

The leggie seemed to have got the length wrong and was punished a lot for his half-trackers. With a huge total on the board, Karn's poor show didn't impact the overall performance much.

Credit should be given to Kulkarni, who also had an indifferent start going for a few runs but came back in the end to get the wickets of Thirimanne, Perera, Seekkuge Prasanna and Kulasekara.

It was Akshar, who finished the match when Ajantha Mendis' switch-hit turned out to be a mis-hit.

Comments
Topics mentioned in this article
Ind vs SL, 2014-15 India Cricket Team Sri Lanka Cricket Team Cricket
Get the latest updates on SA vs IND 2021-22, check out the Schedule and Live Score . Like us on Facebook or follow us on Twitter for more sports updates. You can also download the NDTV Cricket app for Android or iOS.