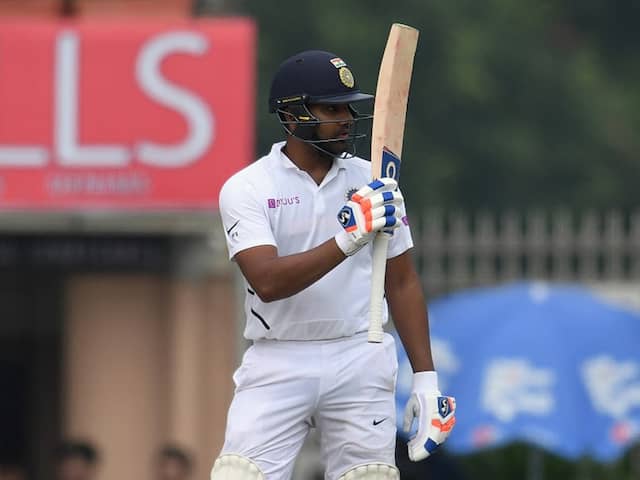 Rohit Sharma continued his sensational run with his third hundred of the series.© AFP

India's batting coach Vikram Rathour on Saturday attributed Rohit Sharma's success as Test opener, in the ongoing series against South Africa, to mental adjustments. Rohit continued his sensational run with his third hundred of the series, powering India to 224 for three after a top-order collapse in the third and final game against South Africa. "He is such an experienced player. I don't think you need to change anything with his technique. The only adjustment I think he had to make was his game plans," Rathour, an opening batsman in the mid 1990s, told reporters after the first day's proceedings. With India reduced to 39 for three, Rohit (117 batting off 164 balls) and Ajinkya Rahane (83 batting off 135) shared an unbeaten 185-run stand to stage the home team's recovery.

"I always believed he is too good a player not to be playing in any format. It was a good call to make him to open. With the amount of runs he has scored, he has settled the issue for the time being," Rathour added.

"Somebody of his experience and the kind of cricket he plays, if he starts coming good top of the order, it changes everything for the Indian team, even when you're touring." Kagiso Rabada was the pick of South African bowlers with 2/54 while Anrish Nortje (1/50) picked the prized wicket of skipper Virat Kohli as India had their worst start of the series.

"There was a bit of moisture early on and the wicket was doing something. They also bowled in better areas but recovery was phenomenal. Both of them batted really well and post lunch, the wicket eased a bit."

Rohit looked tentative early on and was given LBW on seven by umpire Richard Illingworth, but survived following a successful review, which showed a faint inside-edge.

"In Tests, you need to play through those tough spells that you will get. I think he's doing that well in this series. Once he's set, he's a phenomenal player, we all know that he can really punish you."

Rohit started to break free towards the end of first session when he pulled Anrich Nortje for the first of his four sixes, while Ajinkya Rahane too came on his own in a difficult second session for the visitors.

"Ajinkya showed great intent today. Whenever he bats with this intent, he looks a really good player. As I said earlier also, they bowled in good areas initially and there was help in the wicket, so Rohit had some problem early on.

"Of course, as a batsman, you need to survive that time, which Rohit did really well. Anybody will look uncomfortable because those were tough conditions." The duo's partnership was a throwback to the days when Mumbaikars dominated Indian cricket.

"It was the khadoos cricket that Mumbaikars used to play. I think that has changed now. You see Mumbaikars playing a lot many more shots. They are producing many aggressive cricketers now.

"You also see some very solid players from other parts of India now. So we are not looking at it as Mumbai partnership. It was two good players who batted well for the Indian team today."

The opening duo of Rohit and Mayank Agarwal have done well in the series with five centuries, and Rathour said they have settled the issue for the time being.

Asked if the team management would explore other options overseas, Rathour said, "Mayank has scored a double and a hundred. Rohit has scored three hundreds so far. Why would we want to change it. I don't think there's any question of changing."

India will be touring New Zealand next year. Rathour had a word of praise for Rabada, who made an impact early on, but lack of support from the other end did not help South Africa. "He showed why he's rated so highly.

He bowled in great areas and there was a lot of movement in the wicket."