Ravi Shastri was full of praise for India after they crushed South Africa by an innings and 202 runs in the third Test in Ranchi to complete a 3-0 clean sweep. 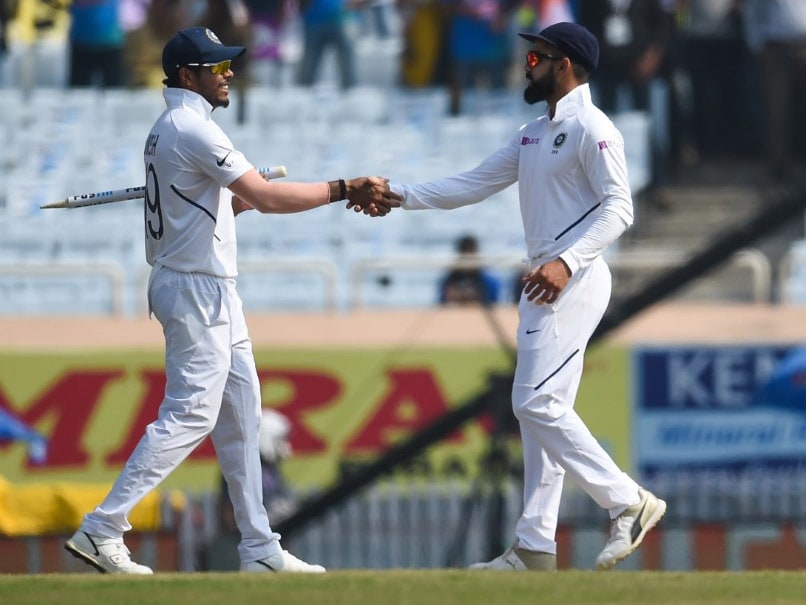 India won the third Test by an innings and 202 runs in Ranchi.© AFP

India head coach Ravi Shastri was full of praise for his team after they crushed South Africa by an inning and 202 runs in the third Test in Ranchi to complete a 3-0 clean sweep on Tuesday. This completed India's record 11th consecutive Test series triumph at home. Ravi Shastri said the current Indian Test team is equally strong in overseas conditions. "Our formula was to take pitches out of the equation. 'Bhaad me gaya pitch' (to hell with the pitches). 'Bees wicket nikaalna hai'. (We have to take 20 wickets)," Ravi Shastri said at the post-match presentation.

Heaping praise on the batsmen that helped India win last two Tests by an innings, Shastri added that his team wanted to "take pitch out of the equation" and take 20 wickets.

"We had a wish that we could take pitch out of the equation. We always wanted to take 20 wickets irrespective of where we were playing. Our batting is pretty much like a Ferrari taking off. We are just focussed on taking 20 wickets," he said.

In the third and final Test at the JSCA International Stadium Complex, India rode on a double hundred by new Test opener Rohit Sharma and a century by vice-captain Ajinkya Rahane.

This was Rahane's first Test hundred at home in over three years. The last time he scored a hundred in the longest format against South Africa was back in 2015.

"Ajinkya Rahane was always there. He just needed to rediscover himself," Shastri lauded the 31-year-old batsman.

Shastri also explained what Rohit must have gone through when he thought of starting his Test career at the top of the order.

"When you need to open in Tests, you might get out in the first 10 balls. But Rohit did well to hang in there for the first two hours. And things changed after lunch for him to take advantage of that. The job satisfaction that an opener gets is wonderful," the Indian coach said.

The Ranchi Test saw left-arm spinner Shahbaz Nadeem make his Test debut. He took two wickets in each of South African innings as they folded for 162 and 133 in reply to India's first innings total of 497/9 declared.

"Extremely impressed with Nadeem. He comes over the top and has a great wrist position. The guy has put in the yards at the domestic level and am glad he finally had his chance at his home ground. He had no nerves and bowled three maidens on the trot," Shastri said.

With the victory in Ranchi, India consolidated their position at the top of the ICC Test Championship Points Table with 240 points in five matches. Shastri called it a complete "team effort".

"Normally, in India you have two players hogging the limelight. But here you have 6 or 7 chipping in.

"You have a captain who leads with example and gets a double hundred. You have Pujara chipping in, you have Rahane scoring the runs in the middle order. You have Jadeja scoring runs at six and picking up wickets," Shastri concluded.

India will next host Bangladesh for a month-long series, comprising three T20 Internationals and two Tests, starting on November 3 in Delhi.

Virat Kohli Cricket India vs South Africa, 3rd Test
Get the latest updates on IPL 2021, check out the IPL 2021 Schedule and Indian Premier League Live Score . Like us on Facebook or follow us on Twitter for more sports updates. You can also download the NDTV Cricket app for Android or iOS.