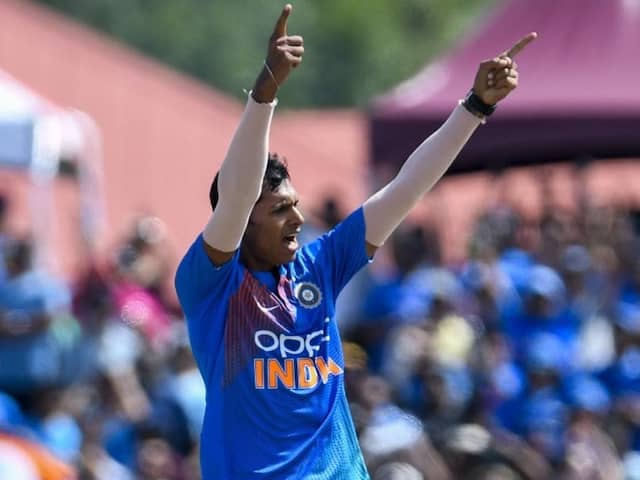 Ahead of India's second Twenty20 International (T20I) against South Africa in Mohali, former South African cricketer Lance Klusener heaped praise on young pacer Navdeep Saini. "I am so glad to see Navdeep Saini being recognized. You don't see many in Indian cricket who can bowl at 150 kmph," the former South Africa all-rounder was quoted as saying by Times of India. Klusener, who worked with Saini when he was consulting with the Delhi team last year, also praised the seamer's bowling action and fitness.

"I think he has a wonderful action which is very clean and smooth. He is superbly fit as well. But while chatting with him, I realized he is hungry to bowl at 150 clicks and above," said Klusener, who is currently working as a consultant with the South Africa team.

"While he loves bowling at 150 clicks, he knows that ability doesn't last forever but while you can bowl 150 kmph now, then just enjoy," he added.

Navdeep Saini made a spectacular T20I debut last month against West Indies, picking up three wickets for 17 runs from his four overs.

"He has bowled really well. The most important thing is, he has proved in different stages. He plays so much of cricket, in IPL and for India A. So when he came into the (senior national) team he was very confident," fellow pacer Bhuvneshwar Kumar had said after the match in Florida's Lauderhill.

With 20-odd games to go before the ICC T20 World Cup, which will be played in Australia, Saini will be looking to consolidate his place in the team with more impressive performances.

Comments
Topics mentioned in this article
Cricket Navdeep Saini Lance Klusener India vs South Africa, 2019
Get the latest updates on IPL 2020, check out the IPL Schedule for 2020 and Indian Premier League (IPL) Cricket live score . Like us on Facebook or follow us on Twitter for more sports updates. You can also download the NDTV Cricket app for Android or iOS.