India vs South Africa: Keshav Maharaj Ruled Out Of Third Test vs India, George Linde To Replace Him 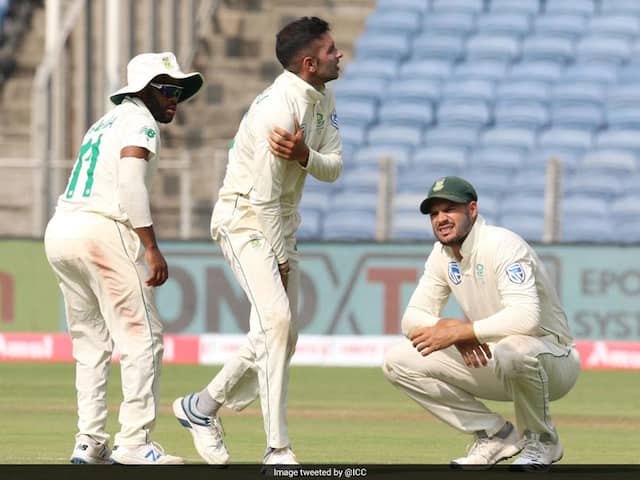 South Africa spinner Keshav Maharaj has been ruled out the third Test against India with debutant George Linde named as his replacement, Cricket South Africa (CSA) announced in a statement on Sunday. Keshav Maharaj sustained an injury to his right shoulder while fielding during Day Two of the Pune Test. Keshav Maharaj scored a maiden Test half-century on Day Three with the shoulder strapped. According to a statement by the country's cricket board, "A reassessment ahead the start of play this morning along with MRI results revealed that he will not be fit to bowl in time to play in the final Test match".

"An MRI showed that Keshav has sustained an injury to a muscle in his right shoulder which was strapped in order for him to bat yesterday. He was reassessed this morning particularly with regards to bowling and showed significant discomfort during bowling," Team doctor Ramjee Hashendra said.

"Based on this morning's assessment and the findings of the MRI, the medical team feels that he will not be fit in time for the next Test match in six days' time. The nature and extent of the injury would mean that he will probably return to play in 14 to 21 days based on his progress during the rehabilitation phase," he added.

The 29-year-old had picked up six wickets from the first-two Test against India.

South Africa Cricket Team India vs South Africa, 2019 Keshav Maharaj Cricket
Get the latest Cricket news, check out the India cricket schedule, Cricket live score . Like us on Facebook or follow us on Twitter for more sports updates. You can also download the NDTV Cricket app for Android or iOS.