India vs England: Virat Kohli posted a video on Twitter giving fans a sneak peek into his final net session on the eve of the fourth Test match against England. 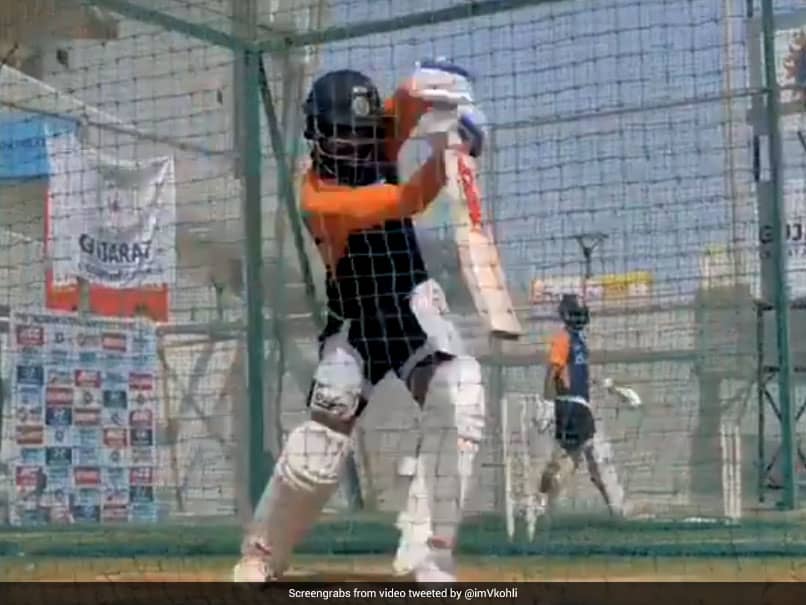 IND vs ENG: Virat Kohli posted a net session video on the eve of the fourth Test match.© Twitter

Virat Kohli showed his love for batting as he hit the nets one last time ahead of the fourth Test, starting in Ahmedabad on Thursday. Kohli, the most followed Indian celebrity on Instagram, posted a video on his social media handles giving his huge fan base a sneak peek into his final training session ahead of a game. While the India skipper didn't write any caption, but he did use a couple of emojis that were enough to sum up his love and passion for batting. While posting the video, Kohli used a red heart and a bat and ball emoji to express his love for the craft. In the video, Kohli can be seen playing all kinds of shots, including a pull shot and a couple of scintillating cover drives.

Addressing the media during a virtual press conference ahead of the fourth Test match, Kohli slammed the pitch critics saying there is "too much noise about spinning tracks". When asked the steps to ensure that the Test match last more than two-three days, the right-handed batsman replied: "Do you play the game to win it or to make sure it goes to five days and there is entertainment?"

Kohli also said that the Indian team has never cribbed out the surfaces while playing overseas and that's why they have been successful.

"The reason behind our success as a team is that we haven't cribbed about any surface we have played on. We have always tried to improve," he added.

India's eyes are firmly set on making to the final of the World Test Championship and for that they need to either win or draw the last Test against England. The visitors, who were outclassed completely in the last two matches, would be looking to end the series with a win and salvage some pride.

Sardar Patel Stadium, Motera, Ahmedabad
Get the latest updates on IPL 2021, IPL Points Table , IPL Schedule 2021 , live score . Like us on Facebook or follow us on Twitter for more sports updates. You can also download the NDTV Cricket app for Android or iOS.