India vs England: Virat Kohli backed KL Rahul and said that the opening batsman is going to be one of India's main batters in the future along with Rohit Sharma 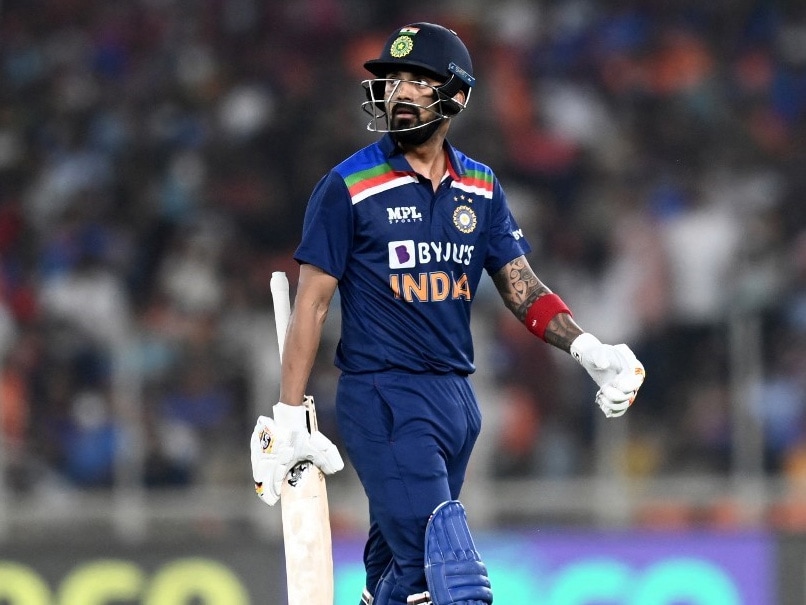 KL Rahul registered a four-ball duck in the third T20I against England on Tuesday.© AFP

Virat Kohli backed KL Rahul, who scored a four-ball duck in the third Twenty20 International (T20I) against England, to come good and said that he will be one of India's main batters in the T20Is along with Rohit Sharma. KL Rahul has been struggling for runs in the ongoing five-match series between India and England, having registered scores of 1,0,0 in the three games so far. India lost the match by eight wickets but at the post-match presentation, Kohli said that Rahul is a champion player and will bounce back.

"He (Rahul) is a champion player and he'll continue to be one of our main batters along with Rohit," Kohli said at the post-match press conference.

Kohli added that England bowlers were on song and their extra pace made things difficult for the Indian batsmen.

He also highlighted that the hosts dropped intensity when they came out to defend the 157-run target.

"The England bowlers attacked right lines and lengths and with their pace they became more potent. We lacked intensity in the second half," Kohli added.

The India skipper mentioned that in the coming games, Hardik Pandya will be given more responsibility with the ball as he is going to be critical for India in the future.

"We want to give Hardik a bit more responsibility with the ball; we know what he can do with the bat," Kohli concluded.

After losing the third T20I, India will be looking to turn things around quickly and stay alive in the series when the two teams meet again at the same venue on Thursday.

England Cricket Team Cricket India vs England 2020-21 India vs England, 3rd T20I
Get the latest updates on ICC Women's Cricket World Cup 2022 and IPL 2022, check out the Schedule , Live Score and IPL Points Table. Like us on Facebook or follow us on Twitter for more sports updates. You can also download the NDTV Cricket app for Android or iOS.