India vs England: Hardik Pandya shared a selfie on social media platform Twitter, where he can be seen posing with the Motera Stadium in the background. 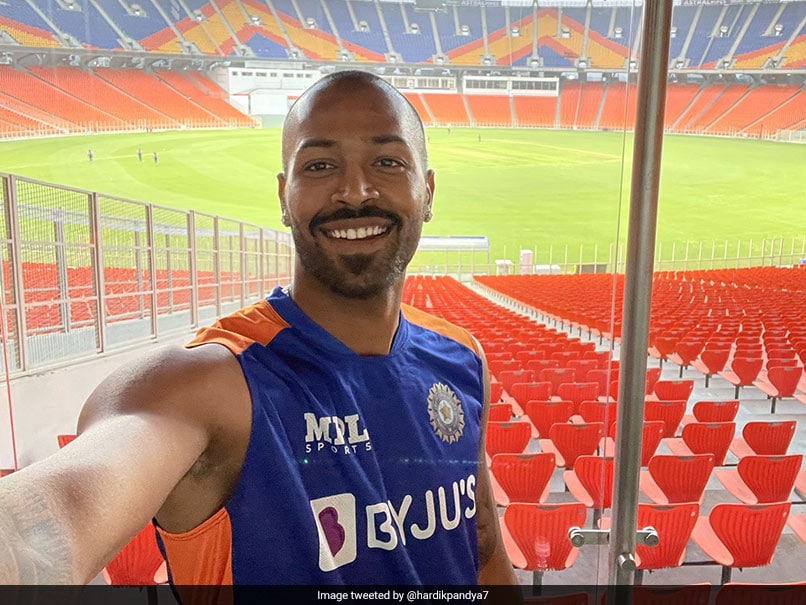 IND vs ENG: Hardik Pandya shared a selfie taken with the Motera Stadium in the background.© Twitter

Team India all-rounder Hardik Pandya took to Twitter on Friday to share a selfie taken with the Motera Stadium in the background. "It feels surreal to be out here at the world's largest cricket stadium, Motera. Absolutely magnificent," read the caption on the tweet. The stadium located in Ahmedabad, Gujarat, is the largest cricket stadium in the world and it will host the final two Test matches of the ongoing four-match Test series between India and England.

It feels surreal to be out here at the world's largest cricket stadium, Motera.

The first two games of the Test series were held at the MA Chidambaram Stadium in Chennai.

England emerged victorious in the opening game of the series by a margin of 227 runs.

The visitors posted a total of 578 after opting to bat courtesy a double century from Joe Root.

India were bowled out for 337 in their first innings following a four-wicket haul by Dom Bess.

The hosts made a late comeback bowling out England for 178 in their second innings.

However, they failed to improve on their show with the bat as evident from their final score of 192 after being handed a target of 420 runs.

In the second Test, India posted a first innings total of 329 after skipper Virat Kohli won the toss and opted to bat.

Opener Rohit Sharma scored 161 off 231 deliveries, in an innings comprising of 18 boundaries and 2 sixes.

Ravichandran Ashwin made his presence felt following the solid platform set, helping India bowl out the visitors for 134 with a five-wicket haul.

Ashwin followed this up with a century in the second innings as the hosts posted a total of 286.

Ashwin took a three-wicket haul as England were bowled out for 164 having been handed a target of 482 runs.

Ravichandran Ashwin Rohit Sharma Cricket
Get the latest updates on ICC T20 Worldcup 2022 and CWG 2022 check out the Schedule, Live Score and Medals Tally. Like us on Facebook or follow us on Twitter for more sports updates. You can also download the NDTV Cricket app for Android or iOS.