India vs England: Virat Kohli let newcomer Ishan Kishan, who hit a fifty on debut, lift the trophy as India beat England by 36 runs in the series decider. 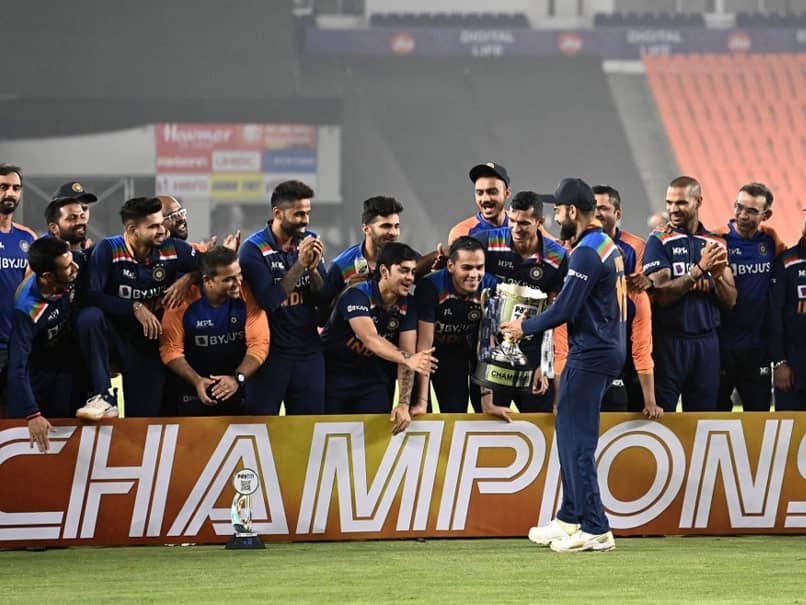 IND vs ENG: After winning the T20I series, Virat Kohli handed the trophy to Ishan Kishan in Ahmedabad.© AFP

India captain Virat Kohli gave the trophy to newcomer Ishan Kishan to lift after beating England in the high-scoring fifth T20 International to win the series 3-2. India beat England by 36 runs after posting a massive score of 224/2 after being sent into bat. Bhuvneshwar Kumar shone as India restricted England to 188/8 to clinch a close-fought series. As the team prepared to lift the trophy, the Indian skipper handed the trophy to Ishan Kishan, who made his debut in the second game of the series.

Kishan was one of the two debutants to shine in the series, with the 22-year-old's maiden half-century setting up India's chase in the second T20I. Chasing 165, the youngster hit 56 off 32 deliveries opening the innings for India.

Apart from Kishan, Suryakumar Yadav also made his debut in the series. Suryakumar did not get to bat in his debut match, but on his first international inning, hit a stunning 57 and followed it up with a quickfire 32 in the series-decider.

While the new boys showed their mettle, it was captain Virat Kohli who was India's biggest performer with the bat in the series, as he hit three unbeaten half-centuries to finish as the highest scorer in the five games.

Starting the series with a duck, Kohli came back to hit 73 in the second game and 77 in the third. After failing to make a mark in the fourth match, he carried his bat in the decider, hitting 80 off 52 deliveries.

Virat Kohli Ishan Kishan Suryakumar Yadav
Get the latest updates on IPL 2021, IPL Points Table , IPL Schedule 2021 , live score . Like us on Facebook or follow us on Twitter for more sports updates. You can also download the NDTV Cricket app for Android or iOS.