India vs England: Rohit Sharma Feels It Is Too Early To Finalise India's Batting Line-Up For T20 World Cup

India vs England: Virat Kohli and Rohit Sharma opened for India in the fifth T20I, and scored half-centuries. India won the match, and also sealed a 3-2 victory in the series. 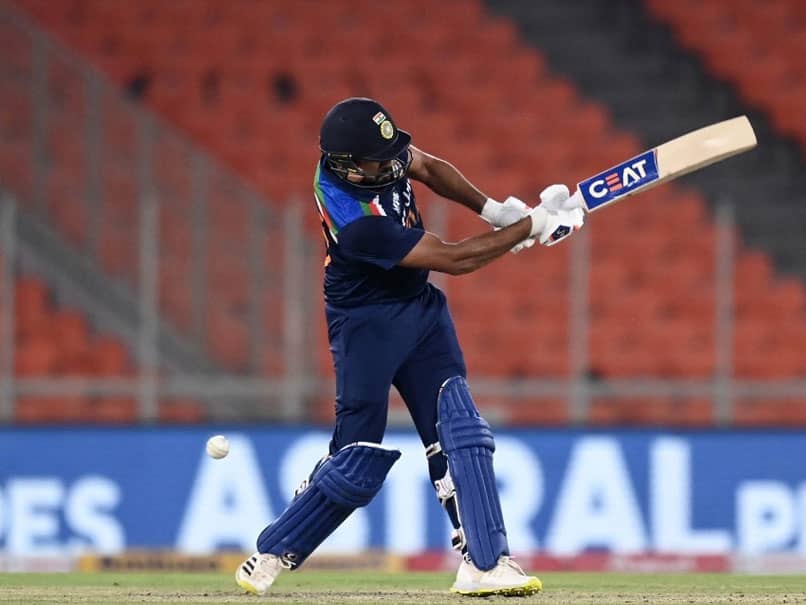 IND vs ENG: Rohit Sharma plays a shot during the fifth T20I, in Ahmedabad.© AFP

India vice-captain Rohit Sharma feels it is still too early to finalise the team's batting line-up for the upcoming T20 World Cup and skipper Virat Kohli opening alongside him in the series decider against England was only a tactical move. Before Rohit's media interaction, Kohli said that he will open in the upcoming IPL and would also like to bat at the top of the order in the T20 World Cup at home later this year. "It is still a long time to go for the (T20) World Cup, so early days to talk about how our batting will look like. We have to sit and analyse what suits the team the most," said Rohit after the series win on Saturday.

"Today was a tactical move because we wanted to play an extra bowler and wanted to leave one batsman out. Unfortunately it was KL (Rahul) which was very tough."

India replaced an out-of-form Rahul with pacer T Natarajan to have an extra bowling option for the crucial game.

"KL has been one our key players in limited overs, especially in this format. Looking at current form, the team management decided to go with the best 11. Having said that, it doesn't send any signal that KL will not be considered or anything like that.

"This was just for one particular game. Things might change as we go closer to World Cup."

Before the series, Kohli had said that Rohit and Rahul were India's first-choice opening pair.

"We do understand his (Rahul's) ability and his contribution at the top, what he's done for us. So, yeah, I'm not going to rule out anything or neither will I say that this is the preferred batting lineup for a World Cup.

"There is still a good amount of time left with IPL in between. And then, I'm hearing, there will be a few T20s as well before the World Cup. So, you know, good enough time for us, at that point in time to judge what will be the best possible eleven for us," added Rohit.

Though Kohli said after the series win that the World Cup squad is more or less sorted, Rohit felt the management is flexible on that front. On Kohli opening with him regularly, he added: "It was good for us to win this game with that batting order. But again, everything will depend on what the captain is thinking at that particular time.

"I'm sure we need to sit and analyze and recollect our thoughts and think about what will be the right thing to do for the team. And if it means he has to open with me so be it.

"The combination, getting the right players in as somebody who's in good form, giving him an opportunity. Those are the things that really matter, and I think we'll be focusing on that come the World Cup. We just finished the T20series, so I don't think Virat will open in the ODI series."

A big plus for India was the successful return of pacer Bhuvneshwar Kumar from injury. He tilted the decider in India's favour by removing the dangerous Jos Buttler.

"See Bhuvi has been here for long enough, and he's done really, really well for us in the shorter formats. So yeah, he still remains one of our leading bowlers, and obviously, in this particular lineup, he is our leading bowler," said Rohit.

"And that is what someone like Bhuvi has done over the years for us."

India got the much-needed x-factor in their batting line-up with the emergence of Ishan Kishan and Suryakumar Yadav. Shardul Thakur also enhanced his reputation as a wicket-taking bowler.

"He's a wicket-taking bowler as simple as that. Last two games, we saw he was under pressure bowling to the highest quality of batting lineup. So I think he responded to that pressure really well," Rohit said of Shardul.

On his Mumbai Indians teammate Kishan, he added: "When we talk about his cricketing skills he's improved immensely from last year's IPL to now, his short-hitting ability has definitely been more aggressive.

"The change I've noticed in him is that he's started to understand the game a lot better. Not to forget, he captains his limited overs team for Jharkhand. So obviously, he's reading the game.

"And you know, someone like him, Surya, and those guys, you got to give them the freedom, just go and express yourself because at the end of the day, they're doing it for the team's cause. And the team management likes that."

Virat Kohli India vs England 2020-21 India vs England, 5th T20I Cricket
Get the latest updates on IPL 2021, IPL Points Table , IPL Schedule 2021 , live score . Like us on Facebook or follow us on Twitter for more sports updates. You can also download the NDTV Cricket app for Android or iOS.