India vs England: India survived some nervy late overs after Suryakumar Yadav's blistering maiden fifty to register a series-levelling eight-run victory over England in the fourth T20 International on Thursday. 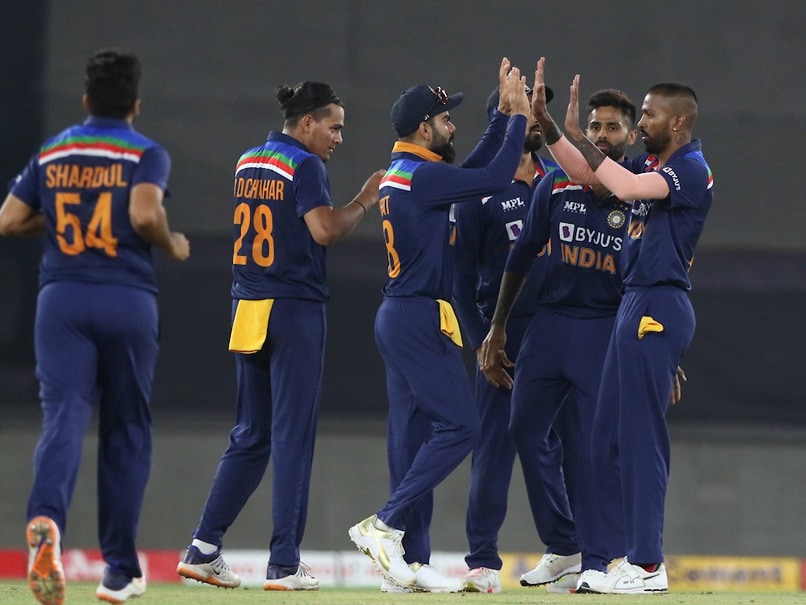 Indian bowlers held their nerves to restrict England to 177/8 as hosts register a 8-run win.© BCCI

India survived some nervy late overs after Suryakumar Yadav's blistering maiden fiftyto register a series-levelling eight-run victory over England in the fourth T20 International on Thursday. Asked to bat, India posted 185 for 8, their highest total in the series, thanks largely to a 31-ball 57 from Suryakumar and then restricted England to 177 for 8 to win the match and level the five-match series 2-2. The visiting side were in the hunt till Ben Stokes (46 off 23 balls) and Jonny Bairstow (25 off 19) were on the crease with the Indian bowlers leaking runs in the middle overs.

The dew also created problems for the bowlers to grip the ball. But the home side made a fine recovery with Hardik Pandya and senior pacer Bhuvneshwar Kumar leading the way.

England needed 23 from the last over and Jofra Archer hit a four and a six but could not get the required runs in the end.

India were led by Rohit Sharma in these anxious moments as Virat Kohli left the field.

Shardul Thakur ended with figures of 3 for 42 while Pandya got 2 for 16. Rahul Chahar also got two and Bhuvneshwar Kumar one wicket.

Earlier, India kept England on a tight leash by giving away just two runs in the first two overs and removing the dangerous Jos Buttler (9) in the third over.

But Jason Roy (40) and Dawin Malan (14) began to pick up the pieces, with England reaching 48 for 1 after the powerplay.

Malan was dropped by Shardul Thakur when on 3 but he did not add too many runs as he was out for 14 in the eighth over with Rahul Chahar cleaning him up.

With the asking rate nearing 10 an over, England had to play the shots but Roy failed to have a complete control of his pull off Pandya in the ninth over for Suryakumar to complete an easy catch near the boundary.

At 71 for 3 at the halfway stage and the asking rate going past 11 runs per over, England had to take risks and Ben Stokes did just that with two huge sixes, one off Washington Sundar and the other off Chahar.

With the dew giving difficulties to the spinners, Stokes and Jonny Bairstow got the boundaries required to keep the asking rate near 10 an over.

Stokes was particularly in ominous form as he cleared the boundaries with ease. But the dismissal of Bairstow in the 15th over and that of Stokes two overs later turned the match in India's favour.

The duo had shared 65 runs for the fourth wicket. After sending Stokes back, Shardul Thakur took two in two. Earlier, Suryakumar smashed a blistering maiden fifty and powered India to 185 for 8 after the hosts were asked to bat.

Suryakumar, who replaced an injured Ishan Kishan, struck six fours and three sixes in his 31-ball 57 to top score for India.

He debuted in the second T20I but did not bat in that match. India did not have a big partnership but quickfire knocks from Shreyas Iyer (37 off 18 balls) and Rishabh Pant (30 off 23) took the hosts to their highest total of the series.

England again opened the attack with leg-spinner Adil Rashid but Rohit Sharma (12) clobbered him for a six in the first ball of the match. But Rohit's promising innings was cut short in the fourth over as he was caught and bowled by Jofra Archer, who took career-best figures of 4/33.

Suryakumar hit Archer for a six in the first ball he faced in international cricket, picked up the gaps and found the boundaries to keep the scoreboard moving, though the England bowlers were by no means wayward.

Hardik Pandya India vs England 2020-21 India vs England, 4th T20I Cricket
Get the latest updates on Fifa Worldcup 2022 and check out  Fifa World Cup Schedule, Stats and Live Cricket Score. Like us on Facebook or follow us on Twitter for more sports updates. You can also download the NDTV Cricket app for Android or iOS.