India vs England, 3rd Test: Pacers Have As Big A Role As Spinners In Pink-Ball Test, Says Virat Kohli

India vs England, 3rd Test: Ahead of the upcoming pink-ball Test, Virat Kohli rejected the assessment that the visitors would have an edge if the pitch at the Motera Stadium favours pacers. 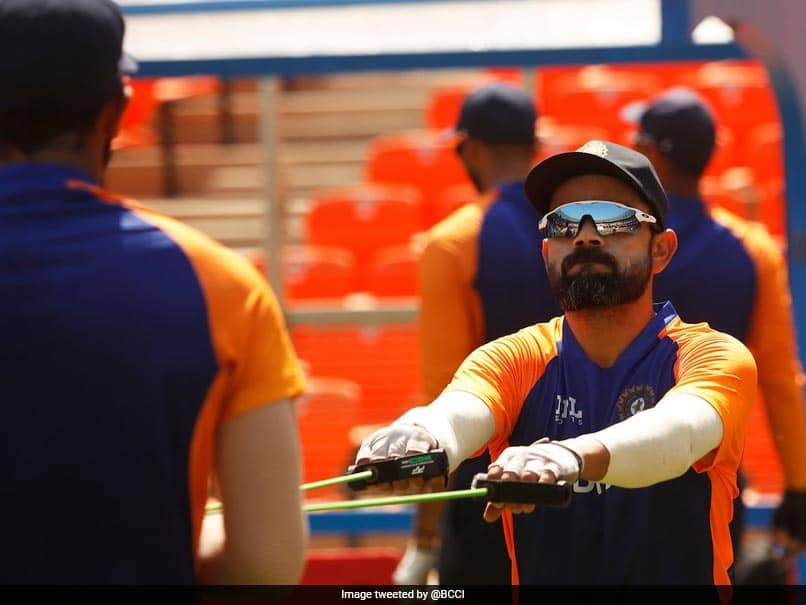 IND vs ENG: Virat Kohli during a training session ahead of the India vs England third Test match.© Twitter

A rank turner is being anticipated at Motera but India captain Virat Kohli expects pacers to have as big a role as spinners in the day-night third Test against England, a side riddled with "many weaknesses" according to him. Both teams have won a game each in the four-match series and ahead of the third Test here starting Wednesday, the talk has been incessantly focussed on the nature of the virgin track at the refurbished stadium. Asked if the ball is unlikely to swing much in the third Test, Kohli said he expects the pacers to be in the game till the ball is "nice and shiny".

"I don't think that is an accurate assessment (that bowl will not swing). The pink ball does tend to swing a lot more than the red ball. We experienced that when we played for the first time in 2019 (against Bangladesh)," Kohli said in the pre-match press conference.

Kohli also rejected the assessment that England would have an edge if the pitch favours pacers.

"...not really bothered about what the strengths and weaknesses of the English team are. We have beaten them in their home as well, where the ball does way more and hold them out every time so we're not really bothered with that. It's just about playing well as a team," he said.

"And yeah, there are many, many weaknesses in the opposition side as well, if you are keen to exploit them. If it's a seamer-friendly track for them it's for us as well.

"And we probably have, you know, among other teams, the best bowling attack in the world so we're not really bothered by what the ball might bring differently to the table. We're ready for anything that comes our way," he asserted.

Both teams go into the game with a lot of unknowns. The pink ball is known to aid the pacers but it remains to be seen how much it will help the spinners, which is considered India's strength at home. Senior India batsman Rohit Sharma has already said that it will be another turning pitch. Kohli said facing the pink ball is more challenging than the red ball irrespective of the nature of the surface.

"It is much more challenging to play with pink ball regardless of the pitch you play on. Especially in the evening, if as a batting team, you are starting your innings under lights then that one and a half hour is very challenging," he said.

"Yes spin will come into play for sure but I don't think the new ball and fast bowlers can be ignored. The pink ball does bring them into the game till the ball is nice and shiny, something we are very well aware of and preparing accordingly," added Kohli.

Sardar Patel Stadium, Motera, Ahmedabad India vs England, 3rd Test Cricket
Get the latest updates on India vs England Series, India vs England , live score and IPL 2021 Auction . Like us on Facebook or follow us on Twitter for more sports updates. You can also download the NDTV Cricket app for Android or iOS.