India vs England: Joe Root saw his side crash to a defeat in the second Test match, at the MA Chidambaram Stadium in Chennai. The four-match series is now level at 1-1. 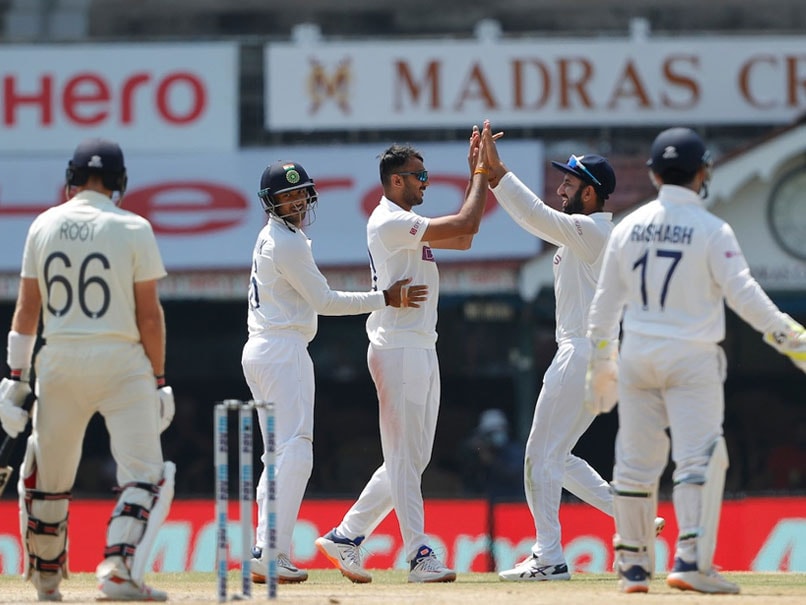 IND vs ENG: India celebrate the wicket of Joe Root during Day 4 of the 2nd Test.© BCCI

After suffering a humiliating defeat, England skipper Joe Root on Tuesday admitted that India outplayed them in all three departments. India levelled the four-match Test series 1-1 against England after an emphatic 317-run win in the second Test, at the MA Chidambaram Stadium on Tuesday. Indian bowlers produced a sublime performance on day four as England only managed to score 164 runs in their second innings. Axar Patel, who made his Test debut in the match, picked a five-wicket haul during England's second innings while Ravichandran Ashwin and Kuldeep Yadav scalped three and two wickets respectively.

Analysing the game, Root also admitted that they "could've played that extra spinner".

"Credit to India, they outplayed us in all three departments. It has been an education for us, you could come up with conditions like these and we have to learn from this and find a way to score runs. We need to learn to build pressure and bowl six balls at one batsman. On day one we could have been a bit tighter, squeeze the game a bit more and make it harder for them to score," Root told host broadcaster Star Sports.

"From day two it was a very difficult wicket to bat on. But we have got to be smarter about how we're building an innings. We are 1-1 and we are excited about the next two games given the way we played in the first game. We could've played that extra spinner, it is always easy to look at balancing a side at the end of the game. It will be different again when we turn up for the third game which will be a day-nighter, and very exciting last two games," he added.

Reflecting on their performances, Root said: "Moeen got better with the ball as the game went on, and we know how destructive he can be with the bat. Ben Foakes batted really well in the first innings and his keeping has always been excellent. There are definitely things we can take from this week and it is just important that we stay level as a team. We performed last week and we have got to learn quickly."

"There are a lot of players who haven't played much cricket in this region and we have to learn quickly, which is something we have done well over the last few years. Ahmedabad will be very different, we have played only two pink ball games. It looks like a fantastic venue, really looking forward to that," he added.

Joe Root India vs England 2020-21 India vs England, 2nd Test Cricket
Get the latest updates on Fifa Worldcup 2022 and check out  Fifa World Cup Schedule, Stats and Live Cricket Score. Like us on Facebook or follow us on Twitter for more sports updates. You can also download the NDTV Cricket app for Android or iOS.