Highlights - India vs England: After bowling England out for 477, India ended Day 2 of the fifth and final Test at 60 for no loss, trailing the visitors by 417 runs. Catch all the highlights of the Test between India and England here. KL Rahul and Parthiv Patel batted well to not lose a single wicket on Day 2 of the 5th Test.© BCCI

England's lower order provided brilliant resistance to help them reach a more than a competitive first innings total of 477. India in reply also batted well in the last session to end the day at 60 for no loss. Catch all highlights here (SCORECARD)

16:45 hrs IST: Hope you enjoyed the coverage. Catch all the action tomorrow morning for the India Vs England 5th Test Day 3 at Chennai at 0930 hours here. Till then, take care.

16:43 hrs IST: Lokesh Rahul (30 not out) and Parthiv Patel (28 not out) batted brilliantly in the last session of the day to not lose a wicket and help India reach 60 for no loss in 20 overs at stumps

Stumps on Day 2 in Chennai, the game very much in the balance with India on 60/0 in reply to England's 1st innings score of 477 #IndvEng pic.twitter.com/YidVdSzplO

16:39 hrs IST: Liam Dawson also got to roll over his arm for the first time in Test cricket before close of play.

16:26 hrs IST: Must admit - this has been a brilliant partnership between Patel and Rahul

16:18 hrs IST: India about to reach the 50-run mark, that too without losing a wicket

16:07 hrs IST: It will be quite something if India can go home tonight without losing any wicket

15:45 hrs IST: Some of the lights are already on at Chepauk.

#OnThisDay Phil Simmons took what remains the most economical spell in ODI history, conceding 3 runs from his 10 overs and taking 4 wickets! pic.twitter.com/oTA9wnzaRL

15:27 hrs IST: India's main task right now would be to not lose wickets

15:21 hrs IST: India have started cautiously in reply to England's 477

15:16 hrs IST: First boundary for India, from the willow of Patel

15:12 hrs IST: So KL Rahul has come out to bat with Parthiv Patel for India and Stuart Broad is bowling for the visiting team

15:10 hrs IST: Ravindra Jadeja is the only one to pick up three wickets while Umesh Yadav and Ishant Sharma picked up two each.

ALL OUT England end on 477 as Mishra bowls Ball. Dawson unbeaten on 66 in his 1st Test knock #INDvENG

14:30 hrs IST: Welcome back after tea! Stuart Broad and Liam Dawson are at the crease. India need two wickets and England will look to score as many runs as possible

14:02 hrs IST: He was struck hard on the helmet by Ishant at the start. It woke him up and he has gone on to score a composed half-century

14:00 hrs IST: Congratulations to Liam Dawson on scoring his maiden half-century that too on debut!

13:55 hrs IST: Stuart Broad has come in to replace Rashid

13:53 hrs IST: Wicket! Finally Umesh Yadav has given India the breakthrough they needed. Rashid went back to the pavilion after scoring a solid 60!

13:45 hrs IST: Debutant Liam Dawson is also heading towards his 50

13:43 hrs IST: And Adil Rashid brings up his second half-century in Tests! It has come at a good time for England

for Adil Rashid! His second in Tests, with 7 fours. A very handy one it has been too #INDvENG pic.twitter.com/clWKf53R6P

13:40 hrs IST: Brilliant fielding and throw at the stumps from Jadeja

13:37 hrs IST: Three close in fielders for the offie

13:35 hrs IST: Ashwin comes in for Mishra and immediately gets a lot of support from the home crowd who are chanting "Ashwin, Ashwin!"

13:30 hrs IST: Superb piece of fielding from Pujara - these things can really boost the confidence of now just the bowlers but the entire team

13:28 hrs IST: Which bowler should Kohli go to for another wicket? He has tried everything in the box

13:05 hrs IST: While England are near the 400-run mark, both Adil Rashid and Liam Dawson are nearing personal landmarks of scoring half-centuries

12:56 hrs IST: Moving away from Chennai, this is historic day for this reason too

#OnThisDay 1946 Don Bradman and Sid Barnes put together a new record partnership for the 5th wicket, amassing 405 runs at the SCG pic.twitter.com/fS8JDnXIHW

12:52 hrs IST: Adil Rashid is lucky and hits a four the next ball

12:47 hrs IST: Kohli will have to think out of the box to get those last three wickets otherwise these two will just keeping batting on

12:37 hrs IST: What Rashid and Dawson are doing actually if keeping the England scorecard ticking.

12:30 hrs IST: India need to break this partnership if they want England to be bowled out before 400

12:25 hrs IST: Progress of play is slightly slow after lunch

12:20 hrs IST: Ishant Sharma is bowling the first over after lunch

12:15 hrs IST: Welcome back everyone. Play resumes after lunch

11:43 hrs IST: The venom that the Indian bowlers had in the morning, has kind of diminished over a period of time.

11:39 hrs IST: Guess that was a shared session of play. India did pick up three wickets but they were able to bowl England out. 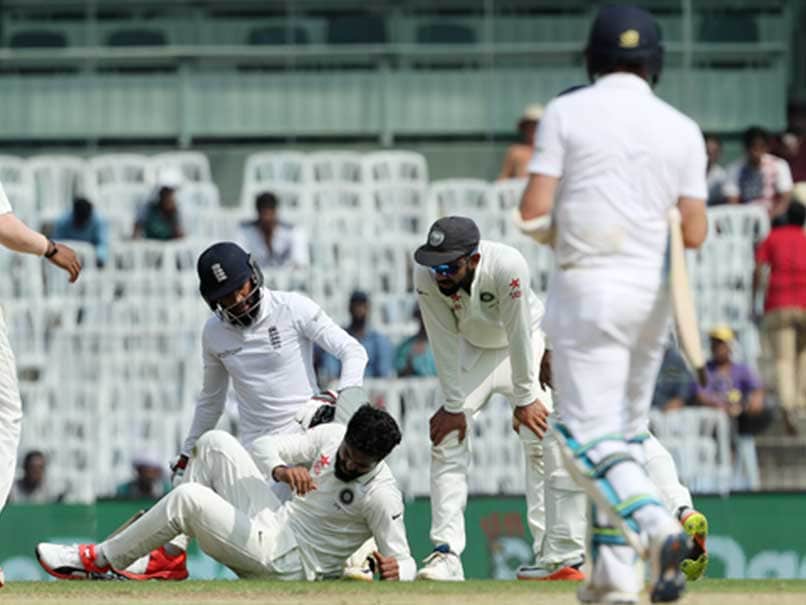 11:26 hrs IST: Looks like India will not be able bowl England out before lunch

11:20 hrs IST: That collision with Rashid does not seem to have affected Jadeja. Superb athleticism and fielding by the southpaw again!

11:15 hrs IST: If England can reach 400, that will be a strong first innings total for the visiting team

11:05 hrs IST: That was quite a dangerous clash between Rashid and Jadeja. Jadeja looks hurt

10:55 hrs IST: England are batting on 344/7 with Liam Dawson and Adil Rashid at the crease

10:47 hrs IST: This is a test for new batsman Adil Rashid

10:40 hrs IST: That was a brilliant innings from Moeen Ali who went to the pavilion for 146. His innings included 13 fours and one six!

10:35 hrs IST: And the try is successful as another short one from Umesh Yadav results in a pull shot from Moeen Ali, who IS CAUGHT AT MID-WICKET BY JADEJA!

10:30 hrs IST: Ishant and Umesh are testing Ali and Dawson with some sharp bouncers

10:15 hrs IST: That must have been scary for the debutant!

10:14 hrs IST: OUCH! That was some bouncer from Ishant! Struck debutant Liam Dawson on his helmet.

10:10 hrs IST: SIX! Moeen Ali comes down the track and hits a maximum over long-off

10:00 hrs IST: Jos Buttler is looking a bit iffy but as long as he does not lose his wicket, it will work for England.

09:55 hrs IST: Historic day for Indian cricket today. Will anyone else make history on this Saturday?

09:50 hrs IST: Ashwin has already picked one this morning. Which Indian bowler will be most successful today? Look at them prepare ahead of the second day's play

How much can the Day 2 track offer? What's in store for the bowlers? We find out in a bit #INDvENG #TeamIndia @Paytm Test Cricket pic.twitter.com/UBHWVHZQ4l

09:43 hrs IST: Both Ashwin and Ishant are bowling quite well. Their bowling is looking full of sting, ready to strike... another wicket might just be around the corner

09:37 hrs IST: Ishant Sharma bowling from the other end

09:35 hrs IST: Local boy R Ashwin has struck on the fifth ball of the day to pick up England's fifth wicket!

09:32 hrs IST: Moeen Ali and Ben Stokes are at the crease and it is Ravichandran Ashwin who will open the bowling

09:31 hrs IST: Day 2 of the fifth and final Test between India and England being played at Chennai is about to begin

Indian bowlers did not look menacing enough as England slowly but surely inched towards a big total. At stumps, Ali was batting on 120 and Ben Stokes was on five. Ravindra Jadeja was India's best bowler with three wickets for 73 runs.

Having opted to bat after winning the toss, the visitors lost skipper Alastair Cook (10) and Keaton Jennings (1) early, and recovered due to a 146-run third-wicket partnership between Root and Moeen.

The visitors were 284/4 at stumps on Friday, and will look to build a big total as they aim to end the series with a consolation win.

On the other hand, Indian bowlers apart from Jadeja found it difficult to get going on Day 1, none more so than in-form spinner R Ashwin. The all-rounder will hope to find his magic touch again and help the hosts continue their quest for a fourth-straight win against England.