Indian skipper Virat Kohli scored an unbeaten 49, as India managed to come back from a top-order collapse to draw the 1st Test match vs England 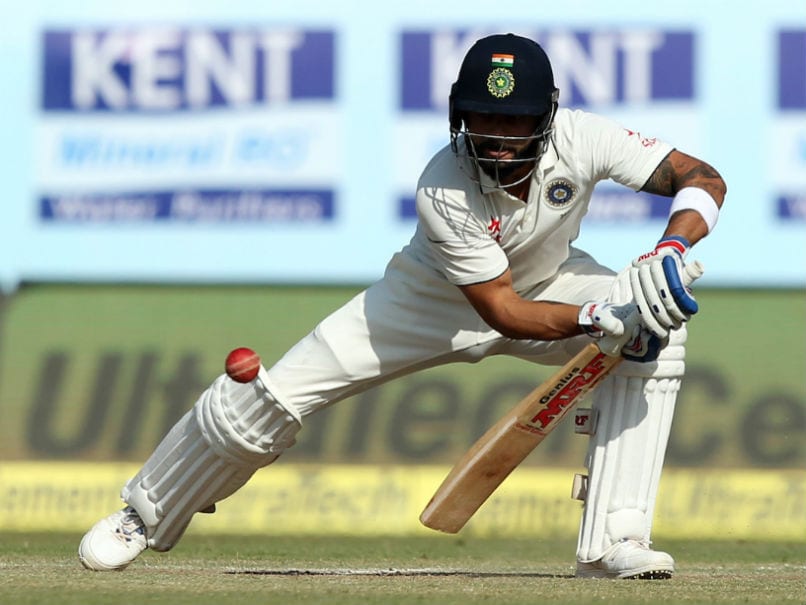 Virat Kohli's gritty knock helped India to a draw in the 1st Test vs England in Rajkot.© BCCI

India survived a scare before managing to draw the first cricket Test against England, who gained the psychological advantage after enjoying the upper-hand for the better part of the five days in Rajkot.

Set a near impossible target of 310 in a minimum 49 overs, India managed to reach 172 for six in 52.3 overs and were never really in the hunt.

Skipper Virat Kohli showed patience as he consumed 98 balls for his unbeaten 49 that had six boundaries and Ravindra Jadeja (32 not out) also hit some lusty blows after the sixth wicket had fallen at 132.

Earlier, Alastair Cook scored his 30th Test century with England declaring at 260 for 3 in the second innings.

That India had literally no chance of winning was ensured by a 180-run opening stand between Cook (130) and young teenager Haseeb Hameed (82) earlier in the day.

On a fifth day pitch that didn't show considerable signs of wear and tear, the Indian spinners barring a brief spell by Amit Mishra (2/60 in 13 overs), were rendered ineffective by captain Cook, who batted for nearly five hours to hit 13 fours in 243 balls.

The first Test once again raised serious questions about the ability of the Indian spinners to bowl on pitches that aren't exactly rank turners.

Ashwin, India's premier strike bowler, in all bowled 69.3 overs across two innings getting only 3 wickets giving away 230 runs.

Ravindra Jadeja got 3 wickets in 47 overs in the match while Mishra also had 3 scalps to this credit having bowled 36.3 overs but not before giving away as many as 158 runs.

On the day, Ashwin at one point of time was bowling a negative line to both Cook and Ben Stokes (29 not out) outside the leg-stump in order to stem the flow of runs.

The other worrying aspect will be veteran opener Gautam Gambhir's form and technical deficiencies that were again exposed in front of some quality seam bowling.

After succumbing to an in-swinger from Stuart Broad in the first innings, the left-hander awkwardly dabbed at a short ball to be dismissed for zero in the slip cordon.

With Karun Nair waiting in the wings and KL Rahul back with a bang from injury scoring a 75 in today's Ranji Trophy game, the Indian team will need to figure out their winning combination at Visakhapatnam for the second Test, starting November 17.

It was a match where England's spinners especially leg-spinner Adil Rashid (3/64 and 7 wickets in the match) looked much menacing  extracting turn from a fifth day pitch.

It won't be a happy sight for Indian team management that England spin trio of Rashid, Zafar Ansari and Moeen Ali got 13 wickets in all compared to Indian toika which got 9 wickets.

The hosts had plunged into deep trouble against the visitors' spin attack by losing three wickets in close succession on either side of tea after losing opener Gambhir for a duck to be tottering at 71 for four.

The dismissals of first innings centurions Cheteshwar Pujara (18) and Murali Vijay (31), both falling to leggie Rashid, followed by that of Ajinkya Rahane (1) off Moeen Ali, for the second time to a poor shot.

But a determined Kohli and Ravichandran Ashwin (36) pulled the innings around with a crucial stand of 47 runs that also consumed 16 overs to keep India afloat and take the game into the last hour.

Although the hosts suffered some more pangs of anxiety at the fall of Ashwin, who got carried away and got out, and wicket keeper Wriddhiman Saha (9), Kohli kept calm and guided the team through the choppy waters.

By the start of the last hour of play in which 15 overs were to be bowled, the duo had been together for 40 minutes with the score on 95 for 4 when Ashwin was dismissed.

He became overconfident after spanking left arm spinner Zafar Ansari for three fours and spooned a catch off the last ball of the over to covers.

Saha too departed by giving a return catch to leg-spinner Rashid in the 43rd over to raise England's victory hopes.

Kohli, who saw batsmen departing at the other end, then piloted India to safety in the company of Jadeja who faced 33 balls as the seventh wicket pair batted out the remaining time, as England bowled 3.3 overs extra before deciding to call it a draw.

Earlier, Cook had produced yet another master class of batting to notch up his 30th Test hundred, his sixth against India, before declaring the team's second innings 309 in front, 36 minutes into the second session on the final day.

Cook, scourge of India in past Test series and especially in their last visit four years ago, atoned for his first innings failure to compile a well-crafted 130 and England declared on 260 for three at his dismissal.

Chasing the improbable target India advanced to 49 for two at tea, needing 261 more runs to get in a minimum 31 overs in the last session of the Test with Vijay and Kohli were holding the fort.

The hosts commenced the second innings poorly by losing Gambhir for a duck, fending awkwardly at Chris Woakes' short and rising ball and guiding it straight to the second slip.

This left first innings centurions Vijay and one-down Cheteshwar Pujara to bat out till the end of the session.

They nearly did it, albeit with some luck against the sharply spinning ball, before Pujara fell leg before to leggie Rashid, who was brought into the attack a little while earlier, when playing back at the stroke of tea, scoring 18 in a stay of 59 minutes.

TV replays suggested the ball to have pitched outside the leg stump, but the Indians, to everyone's surprise, did not review the decision of umpire Kumar Dharmasena.

The duo, who put on a double century partnership in the first innings, this time around could add only 47.

Post tea, India quickly lost Vijay, caught bat-pad in the leg trap for the second time in the game off Rashid, and Rahane, who was bowled trying to cut Moeen’s off break.

The sudden loss of three top batsmen - Pujara, Vijay and Rahane - in the space of just seven overs for the addition of three runs, lifted England's spirits and they attacked the Indians with a ring of fielders around the bat.

The tall off spinner, who had a poor outing with the ball but scored an invaluable 70 in the first innings, also survived a DRS call after he was full stretch to defend Ali’s sharply turning off break in over no. 30.

Thereafter he and Kohli batted out some crucial overs, before Ashwin and next man Saha were dismissed in close succession to raise the visitors' hopes again before they were dashed by the Indian captain and Jadeja.