The return of the quintessential small-town boy to his roots for his first professional engagement is a fairytale script, and Dhoni is looking forward to it. 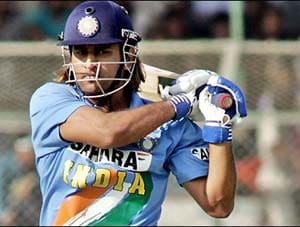 Ask any athlete what his preferred playing arena is, and the answer will invariably be his home ground. Familiarity with conditions and support of loyal fans aside, there is a deeper connotation. For an athlete growing up with a dreamÂ  and then going on to represent his country in the locality where he first dared to dream is a seminal moment.

Among the many romantic moments cricket has seen in recent times, two in Australia come to mind - Shane Warne's hat-trick against England at the Melbourne Cricket Ground in December 1994, courtesy a brilliant catch by David Boon at short-leg, and Steve Waugh's hundred in the 2002-03 Ashes series at the Sydney Cricket Ground off the last ball of the second day's play. Milestones aside, the emotional response of the crowds made those instances memorable. For 50,000 Sydneysiders at the SCG, Waugh's 29th Test century which silenced his increasingly vocal critics reflected their community's character on the biggest platform. In South Africa, Jacques Kallis has made Cape Town, where he has a Test average of 77.07, his bastion.

Numerous international venues in India have meant Indian cricketers have not always had the chance of establishing a strong rapport with their home grounds. Sachin Tendulkar has played only 23 international matches in Mumbai, while many Indians have gone through entire careers without ever experiencing the feeling of what it is to represent the nation a stone's throw away from where they grew up.

Mahendra Singh Dhoni belongs to this list, but he will soon outgrow it. On Saturday (January 19), Dhoni will lead India against England at the newly constructed HEC International Cricket Stadium in Ranchi, which will be making its international debut. Dhoni's first match at home will doubtless be a moment to cherish.

Dhoni has played in Jharkhand, his home state, earlier. He averages 62 in two ODIs at the Keenan Stadium in Jamshedpur, but that's not home. Ranchi is home and Harmu Housing Coloney, Dhoni's residence, is within a kilometre of the ground.

Ranchi cricket is replete with Dhoni folklore - from stories of how he took up the game accidentally, changing tack from being a football goalkeeper, legends of his milk-drinking spree, and tales of how he took up a job as a ticket collector at the Kharagpur railway station to earn his living, before his fortunes turned.

From announcing his arrival in international cricket with two explosive ODI centuries in 2005 to winning two world titles and leading India to the top of the Test table, it has been a dream run for Dhoni. In the process, he has given a sporting identity to his city.Â  "When I came (into international cricket), it was difficult to make people understand which place or city I was from... but now people outside recognise the city quite easily," said Dhoni during the current series against England. "It's good for the state and very good for our city."

The return of the quintessential small-town boy to his roots for his first professional engagement is a fairytale script, and Dhoni is looking forward to it. "It is a different feeling for me, to play in Ranchi after a long time," he said. "It's quite similar to the first first-class game I played in my city."

The influence Dhoni's rise has had in these parts is well documented. For a long time, almost no cricketer of international repute emerged from Bihar, from which Jharkhand was carved out in 2000. After Dhoni's international debut in 2004, cricket has been on an upsurge. Saurabh Tiwary was part of India's Under-19 World Cup-winning team in 2008 and has also represented the country. Jharkhand won the Vijay Hazare Trophy in 2010-11 and in the 2012 edition of the Indian Premier League, seven players from Jharkhand were part of the playing XI for various franchises at different points.

Jharkhand's representation in East Zone sides has also increased, and this season they made it to the quarterfinals of the Ranji Trophy. As Shahbaz Nadeem, the Jharkhand captain, says, "Dhoni bhai is a great influence on all of us. He has made us believe in ourselves, and we now know that we can also achieve bigger things in life."

In Ranchi, there is one generation which has known Dhoni from childhood, another that has grown with him, and an entirely new generation whose childhood is filled with stories of the Indian captain's legacy, but who have never seen him play in the flesh.

"We are definitely excited to see Dhoni bhai play in Ranchi. Just watch how many new kids are going to join cricket academies in the state after this match," says Nadeem. "For many, it will be their first international match and Dhoni's presence will take the game to a new level in the state."

At noon on Saturday, many generations of Ranchi will come together to lap up the experience of seeing one of their own in the middle of the playing arena. Given the form Dhoni has been in, the day could well end with a special knock leading India to victory, but even if that does not happen, the significance of one of the most celebrated careers in Indian cricket's recent history having come a full circle will not be diminished.

Comments
Topics mentioned in this article
Cricket India vs England 2012 England Cricket Team India Cricket Team MS Dhoni
Get the latest updates on ICC T20 Worldcup 2022 and CWG 2022 check out the Schedule, Live Score and Medals Tally. Like us on Facebook or follow us on Twitter for more sports updates. You can also download the NDTV Cricket app for Android or iOS.