India vs England 1st Test match: Moments of the day

The crucial moments of the day from the first India vs England Test being played at Motera stadium, Ahmedabad. It begins on an anticipated and expected note

When the Test matches are played in India, fans almost expect that the home side wins the toss and elect to bat first. MSD is not particularly known for winning tosses but as they say, an auspicious start here could just turn things around. Dhoni did not have any trouble in choosing to bat first on a mysterious Motera track, which was the talk of the town before the match started and remained in contention even after the day's play. Admittedly, Alastair Cook too would have preferred to bat.

The stage was quite literally set for Viru and Gauti and despite all the troubles in the air, the duo did not disappoint today, at least for a while. They congratulated each other, in the face, at every milestone, they were trying to be aggressive and they were doing what they do best, score runs. Lady luck was finally smiling on the pair with dropped chances and missed stumpings. The sun was shining after all. Gautam Gambhir scored his highest score in the last eight Test innings while Sehwag notched-up the highest of his last 31 innings. Infact, Gambhir was playing well, despite not scoring a hundred, till the South African tour in late 2010 and early 2011. Since then, in 23 innings, he only has three fifties and no hundreds (but of course). Sehwag, on the other hand, has only managed decent scores in the last two years, against West Indies and New Zealand, with all due respect to both the sides.

Turning from off to Swann

But as soon as the partnership started taking dangerous proportions, Swanny had other ideas. Already living a charmed life, Gambhir (had inside-edged one from James Anderson; missed stumped and probably dropped by Prior) did not anticipate a short of a length delivery from the offie which decided to keep low as well. It was an all to familiar dismissal for the south-paw, seeing the stumps rattled. Swann went on to take all four wickets to fall during the day and would have liked to have better support from his 'Army'. He, today, not only went past Jim Laker as the most successful English offie but still has a chance to grab a ten-for 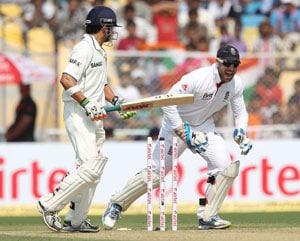 Those misses and the repercussions

Gambhir's missed stumping or catch (whatever) did not cost England anything at all, with him getting out in the same over in a very Indian mode of dismissal. Just an over or so before that, Sehwag's catch had been grassed by Matt Prior off Jimmy Anderson. Viru too did not trouble the English too much adding 37 to the score when he was dropped. And when Virat Kohli was dropped, he was batting on 4 off 32 balls (Yes, that's true. It can't be the other way round anyway!). His addition was 15 runs. But the major chance was given by the new 'Wall', Cheteshwar Pujara. He was on 8 when one spooned to mid-on (James Anderson) off Tim Bresnan and if not for the misjudgement, the Indian number 3 would have been on his way. He added another 90 runs and is still going strong. That means a total of 142 runs! Will Barmy Army rue that?

Viru played a totally un-Sehwag like innings today and it may be underlines his skills to some extent. It was not a slam-bang effort at all, despite hitting 66 runs in boundaries or sixes. He did not dance down at all nor did he waft at balls at random. Instead, he played a lot of daft cuts and drives, used his wrists beautifully and although scored at run-a-ball, showed some patience. May be he had listened to what Aakash Chopra had to offer.

On the other end of the spectrum were Virat Kohli and master blaster Sachin Tendulkar. The innings both of them played, too were against their personal natures, in general. The Sachin of old did play attacking from the word go but off-late he has not done so, successfully. He might be feeling the frustration inside but on the outside it seems that he cannot choose the middle-path and 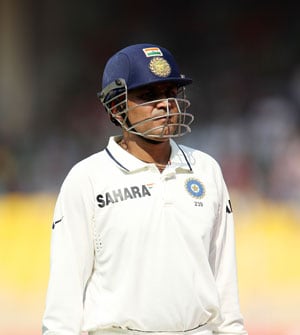 either plays too aggressive or too defensive. Virat too was inexplicably uncomfortable out in the middle today. His first run came after 29 deliveries and he did not look at ease against the wily Swann.

India played at more than 4.50 runs per over the time Sehwag was on the crease but the time he was not there, the run-rate barely touched 2.50. One major blunder that the batsmen committed was not running hard enough. Converting those 1s into 2s and 2s into 3s is essential but shoddy running and sometimes no running at all, was the order of the day. While Viru and Gauti did not run with great deal of purpose, Sehwag did not let Pujara charge between the wickets, Sachin was all pumped up to hit out and only do that and Kohli was in no mood to get the ball off the square.

Amidst all this, Jonathan Trott had his moment of madness when Kohli edged one off Swann. He clearly dropped that and might have hoped against hope that it would not be caught on camera. His hope deserted him though. To be fair to him though, in the heat of the moment, things might have slipped out of hands, literally.