When Alastair Cook forgot to bring his blazer

According to Graeme Swann, Alastair Cook forgot to bring his blazer from England and it is being sent by a friend. 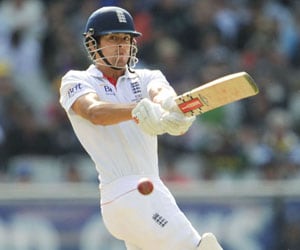 England skipper Alastair Cook could have been in a tricky situation while going out for the toss for the first Test here on Thursday as he forgot to bring his team blazer and somebody had to rush it from home, if off-spinner Graeme Swann is to be believed.

Swann, who returned here after flying home for a few days to attend to his sick little baby Charlotte, said Cook left messages to his mobile phone asking him to bring his England blazer from home.

But Swann did not check his phone and so did not know about the message and it needed a friend to bring the blazer for Cook who would be wearing it tomorrow when he goes out for toss with his India counterpart Mahendra Singh Dhoni.

"While I was home, Alastair Cook left messages asking if I could bring his England blazer back with me. He'd forgotten it and he needs the blue jacket, complete with England crest, for the coin toss at the start of each Test," Swann wrote in his column for 'The Sun' tabloid.

"But I didn't check my phone -- I had a few other things on my mind. In the end, I believe a friend has brought out Cooky's blazer," said Swann.

He said Cook forgetting his blazer was nothing unusual as cricketers are used to such things before going for a tour.

"We have to pack so much stuff for tours, it's no surprise things are forgotten. Believe it or not, I went to the UAE earlier this year and forgot all my cricket kit. I'd packed three bags and picked up only two of them when I left for the airport.

"So I had my clothes and Test cricket whites, but no bats, pads, gloves or helmet. They were sitting in my hallway and had to be flown out a few days later," said 33-year-old Swann, who has taken 192 wickets from 46 Tests.

Swann said he was now totally focused on the first Test though "two long-haul flights in the space of five days is not ideal preparation for the opening match of a huge series".

" ... but some things are more important than cricket. When I heard last Wednesday that Charlotte was unwell and in hospital, I didn't hesitate about going back. They are the sort of phone calls we all dread on tour - news that somebody close is ill," Swann said.

"And this was concerning a little baby who had come into the world just three weeks earlier. It was hard. But the nurses and everyone else were brilliant and Charlotte is out of hospital now and doing much better. I'm keeping my fingers crossed that everything will stay like that."

He said England will have to play spin better than what they did against Pakistan in the UAE if they want to beat India in the four-match Test series.

"I genuinely believe we can win but we must play better against spin than we did in the three Tests against Pakistan earlier this year. We need to get back to playing the same brand of smart, aggressive cricket we did when winning The Ashes a couple of winters ago," he said.

"Spin was undoubtedly our downfall in the UAE but we saw in the Second Test of the subsequent series in Sri Lanka that we had a different approach to facing slow bowling. That will be carried forward to this tour.

"I am now concentrating on the Test. I love it when I know I'll have a lot of work to do. The conditions will be hot, the pitches dry and spin will be a big factor in the four-Test series. I had sleep flying back to India and any jet-lag has gone. I'm fresh and the ball has been coming out well in practice."

Swann also said that Kevin Pietersen's return to the dressing room has also been very smooth.

"We have some of the most destructive batsmen in the world who go out and play with a free spirit and dominate bowlers. Nobody can be more destructive, of course, than Kevin Pietersen and his return to the dressing room has been very smooth."

Comments
Topics mentioned in this article
Cricket Graeme Swann Alastair Cook India vs England 2012 England Cricket Team Ravi Bopara
Get the latest Cricket news, check out the India cricket schedule, Cricket live score . Like us on Facebook or follow us on Twitter for more sports updates. You can also download the NDTV Cricket app for Android or iOS.