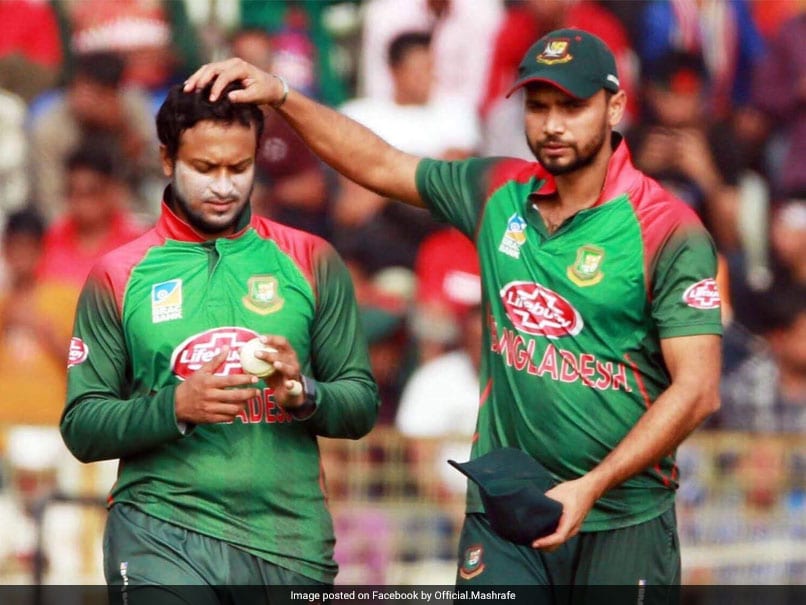 Sahkib Al Hasan was handed a two-year ban by the ICC after he failed to report corrupt approaches.© Facebook

Shakib Al Hasan' suspension came as a shock to many of his fans and more so for his teammates. Shakib was suspended by the International Cricket Council (ICC) for two years (one year suspended) after he failed to report corrupt approaches made to him on multiple occasions. Showing solidarity with their star all-rounder, several Bangladesh players, including One-day International (ODI) skipper Mashrafe Mortaza and wicket-keeper Mushfiqur Rahim, posted heartfelt messages on their social media accounts, vouching for his strong comeback. Mushfiqur, in his post , said that it will be difficult for him to step on the field without him as the two of them have been "playing cricket together" for over 18 years, starting from the age-level cricket.

"Age level.. International... Over 18 years of playing cricket together... Very sad to even think about playing without you on the field. Hoping that you comeback soon like a champ. You always have my support, and whole of Bangladesh. Stay strong. In Sha Allah," Mushfiqur wrote on Instagram.

Age level.. international... over 18 years of playing cricket together... very sad to even think about playing without you on the field. Hoping that you comeback soon like a champ. You always have my support, and whole of Bangladesh. Stay strong In Sha Allah

Don't know what should I say. Still I can't able to believe that we have to play without you. But I know and believe one thing that you will be definitely comeback strongly. We will be waiting for the day @Sah75official bhai. #WeAreWithShakib pic.twitter.com/Obk4IosNgc

Mortaza, who led Bangladesh in the World Cup 2019, said that he is sad to hear about Shakib's suspension but at the same is also optimistic of his strong comeback.

Mortaza even said that he "will be able to sleep in peace" knowing that Bangladesh will play 2023 World Cup final under Shakib's leadership.

"In light of the events surrounding a warrior of 13 long years, I will definitely spend some sleepless nights. But in a few days we will be able to sleep in peace knowing that in 2023, we will play the World Cup final under his leadership. Because the name is Shakib Al Hasan," Mortaza wrote on Facebook in Bangla.

The Bangladesh Cricket Board (BCB) on Tuesday announced that the T20I side will be led by Mahmudullah while Mominul Haque will lead the Test squad.

Mustafizur Rahman India vs Bangladesh International Cricket Council Cricket
Get the latest updates on Fifa Worldcup 2022 and check out  Fifa World Cup Schedule, Stats and Live Cricket Score. Like us on Facebook or follow us on Twitter for more sports updates. You can also download the NDTV Cricket app for Android or iOS.