Virat Kohli didn't look pleased as Rishabh Pant tried a direct hit with a no-look flick during the fourth ODI in Mohali. 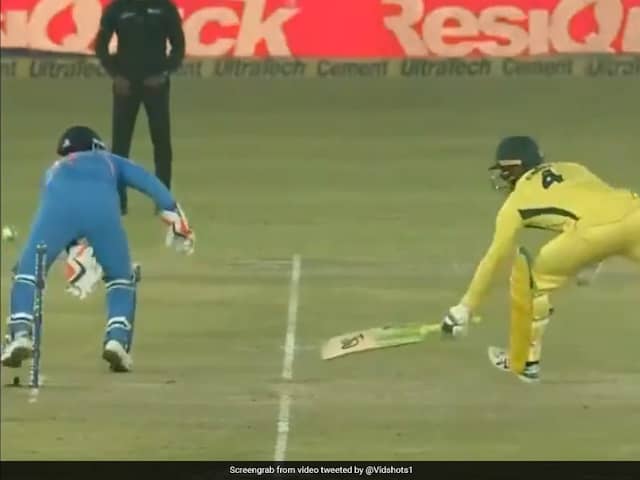 Rishabh Pant came in as MS Dhoni's replacement in the fourth One-day International (ODI) after the former India captain was rested for the final two games of the five-match series against Australia. Pant impressed with the bat scoring a 26-ball 34. However, the youngster didn't have a happy return behind the stumps, missing a few clear-cut chances. On one occasion, Pant even tried to do an MS Dhoni no-look flick but failed miserably at it, drawing an angry reaction from India skipper Virat Kohli.

Virat Kohli looked completely miffed as Pant tried a direct hit with a between-the-leg flick but the ball went over the stumps and the Australians sneaked in an overthrow.

Here is a clip of some of the Rishabh Pant's missed chances, including a botched stumping opportunity.

It turned out to be a dismal day for India in the field despite the heroics of Shikhar Dhawan and Rohit Sharma. The opening duo's record partnership had helped India post a mammoth 358 for nine with Dhawan smashing a sensational century.

However, things turned sour for the hosts as Ashton Turner took the Indian attack to the cleaners with some unbelievable hitting, helping Australia chase down a record-breaking target of 359 runs.

It was the highest ever total that Indian team failed to defend in its ODI history, losing the game by four wickets.

Playing only his second ODI, Turner hit an unbeaten 84 off 43 balls with five boundaries and as many as six sixes to help Australia reach the target with 13 balls to spare.

With the series level at 2-2, Feroz Shah Kotla in Delhi will play host to the decider on Wednesday.

MS Dhoni India vs Australia, 2018/19 India vs Australia, 4th ODI Cricket
Get the latest updates on IPL 2020, check out the IPL Schedule for 2020 and Indian Premier League (IPL) Cricket live score . Like us on Facebook or follow us on Twitter for more sports updates. You can also download the NDTV Cricket app for Android or iOS.