Virat Kohli has been out of action since the end of the 3rd ODI against New Zealand and is expected to lead India in the upcoming series against Australia. 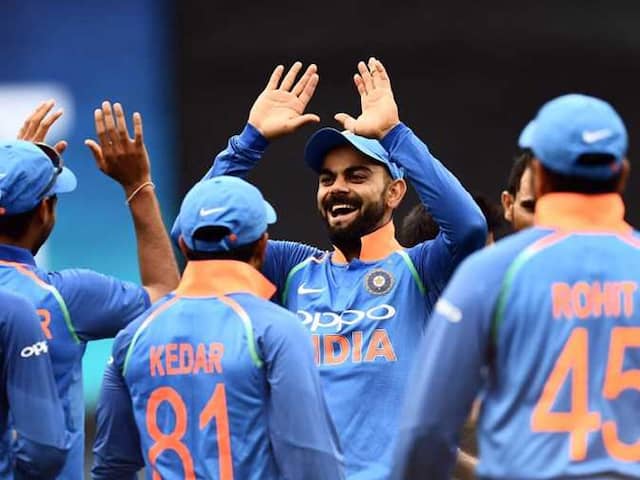 India vs Australia: India will play two T20Is against Australia before engaging in an ODI series.© AFP

India are all set to host Australia for a limited-overs series as a dress rehearsal for the upcoming World Cup 2019, which begins in England on May 30. Zeroing in on players for a couple of available slots, including a toss-up between left-arm pacers Jaydev Unadkat and Khaleel Ahmed, will be the selection committee's primary focus on Friday when they pick the India squad for the series against Australia, starting February 24. India will play two Twenty20 Internationals (T20Is) against Australia before engaging in a five-match One-day International (ODI) series. Moreover, Virat Kohli is expected to return to lead India after having been rested for two ODIs and the T20I series in New Zealand.

The series against Australia will also be an indicator as to who among Rishabh Pant and Dinesh Karthik will be India's second wicketkeeper batsman.

KL Rahul is back in the fray as the third opener after a couple of good innings for India A against England Lions in the two unofficial Tests.

While the two T20Is will be a pre-cursor to the ODI series, vice-captain Rohit Sharma is likely to be given a short break to rejuvenate and come back fresh for the ODIs.

Pace spearhead Bumrah will be back in action for the final dress rehearsal and the selectors are unlikely look beyond 16 to 17 players, who are now in the scheme of things for the World Cup.

There are at least four contenders for the last two slots depending on the combination the team management would want.

While Bumrah, Shami and Bhuvneshwar are certainties in the pace department, the bone of contention is a left-arm seamer who will add variation to the line-up.

Khaleel, the young Rajasthan speedster, played in Australia and New Zealand but he looked like a work in progress who could be all at sea in a mega-event like the World Cup.

Unadkat, who has only sporadically played for India since his debut in 2010, is suddenly back in contention after a good Ranji Trophy season where he led Saurashtra to the final.

Unadkat is a matured bowler now with more variations and an increase in pace. He is also more experienced courtesy his IPL stints.

A shoot-out is expected between Pant and Karthik, who are both finishers in their own right.

Pant could also double up as the third opener although Rahul is also in contention as he has the team management's backing.

Australia Cricket Team Cricket India vs Australia, 2018/19
Get the latest Cricket news, check out the India cricket schedule, Cricket live score . Like us on Facebook or follow us on Twitter for more sports updates. You can also download the NDTV Cricket app for Android or iOS.