Steve O'Keefe starred with the ball once again as India lost the first Test match against Australia by 333 runs at Pune. 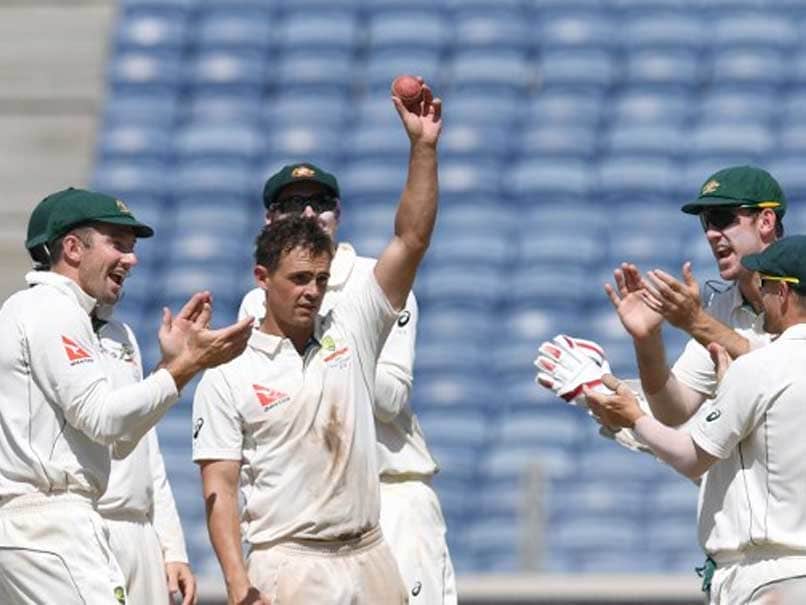 Out of all the bowlers India thought to be a threat to their famed batting line-up, it was SteveO'Keefe who picked up 12 wickets in the match to give Australia a famous victory at Pune that also ended India's 19-match unbeaten streak in Tests. India were bundled out for 107 in the second innings with the left-arm spinner returning with figures of 6 for 35 as Nathon Lyon made short work of the rest by picking up the remaining wickets. Lyon finished with figures of four for 53 as Australia won the first Test match by 333 runs to take a 1-0 lead in the four-Test series.

Set a target of 441 runs to win, India lost both their openers after lunch with the score on 16. To make matters worse, both the openers had used up their reviews, leaving the rest of the batsmen nothing to play with.

After a dismal start, it was Virat Kohli's (13) turn to take the long walk back as he misjudged a ball from O'Keefe that went straight on with the arm, knocking his off-stump out of the ground. Ajinkya Rahane (18) tried to take the attack to the opposition but perished in the process while playing an uppish drive straight to covers.

Ravichandran Ashwin (8), Wriddhiman Saha (5) and Ravindra Jadeja (3) fell like ninepins, leaving India in all sorts of trouble. O'Keefe did the bulk of the damage by removing both Ashwin and Saha in quick succession while Lyon took care of Jadeja.

Cheteshwar Pujara (31) showed some character and tried to stay in there for as long as possible but O'Keefe had other ideas as he trapped Pujara right in front of the stumps just after tea.

Umesh Yadav and Ishant Sharma were dismissed by Lyon as India slumped from 89 for five to 107 all out.

This was Australia's first victory in India since the 2004 series and India will have to regroup and rethink about their strategies leading up to the second Test match with the visitors taking a 1-0 lead in the four-match Test series.

Earlier on Saturday Australian skipper Steve Smith struck his first century in India before the visitors were bowled out for 285 in an extended morning session.

Smith made 109 to compound India's misery after O'Keefe had put the visitors on top with his heroics on day two at Pune's Maharashtra Cricket Association Stadium.

Mitchell Starc also played a big part after scoring 61 in Australia's first innings of 260 after the visitors won a crucial toss.

Starc then took two wickets in India's first essay, getting Kohli out for nought. Starc also hit a breezy 30 in the second innings.

The teams now head to Bangalore for the second Test starting March 4. The final two games are scheduled in Ranchi and Dharamsala.

Comments
Topics mentioned in this article
Virat Kohli Steven Smith Steve OKeefe Nathan Lyon Maharashtra Cricket Association Stadium, Pune India vs Australia 2017 Cricket
Get the latest updates on ICC T20 Worldcup 2022 and CWG 2022 check out the Schedule, Live Score and Medals Tally. Like us on Facebook or follow us on Twitter for more sports updates. You can also download the NDTV Cricket app for Android or iOS.