While saving a run on the first day of the third Test, Virat Kohli hurt his shoulder and Farhart rushed onto the field to attain to his injury. Kohli eventually left the field with the physio. 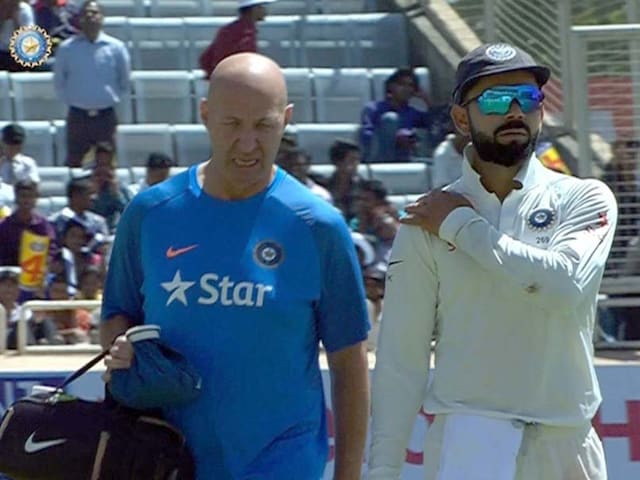 Allegations and denials flew thick and fast between rival captains Virat Kohli and Steven Smith with the India skipper alleging that his team's physio Patrick Farhart was "disrespected" by Australians during the 3rd Test in Ranchi. Kohli said that some Australians unnecessarily taunted Farhart but Smith rubbished the claim.

"They (four-five of them) started taking Patrick's name. I don't know why. He's our physio. His job is to treat me. I don't find the reason behind it. I could not understand. You must ask why they have started taking his name," said Kohli after the Ranchi Test ended in a draw.

While saving a run on the first day of the third Test, Kohli hurt his shoulder and Farhart rushed onto the field to attain to his injury. Kohli eventually left the field with the physio.

Later Glenn Maxwell was seen mocking Kohli's injury when he imitated his action by clutching his right shoulder after his dive to save a boundary. The Indian skipper, too, gave it back with a similar gesture when David Warner got out on Day 4.

When an Australian scribe asked about the mocking incident involving himself and Glenn Maxwell, an upset Kohli said: "It's funny all our guys ask about cricket as the first thing and you ask about something controversial. But it's okay. These things happen on the field."

However Smith insisted that they never disrespected Farhart, who himself is an Australia.

"It was a bit disappointing. I didn't actually do anything. Virat was having a go at me saying I was disrespecting Patrick Farhart. It was probably the exact opposite.

"I think he probably did a pretty terrific job to be able to get Virat back on the field after that shoulder injury. He's a terrific physio and he obviously does a great job for them," said Smith.

Asked about his take on the spirit of the game, Smith said: "There's always a bit of tension when you're playing India in Test matches. As far I'm concerned it's being played in the right spirit on the field and it's a hard and tough grind. That's how I would explain it and no issues with that."

Comments
Topics mentioned in this article
India Cricket Team Australia Cricket Team Virat Kohli Cricket JSCA International Stadium Complex, Ranchi India vs Australia 2017
Get the latest Cricket news, check out the India cricket schedule, Cricket live score . Like us on Facebook or follow us on Twitter for more sports updates. You can also download the NDTV Cricket app for Android or iOS.